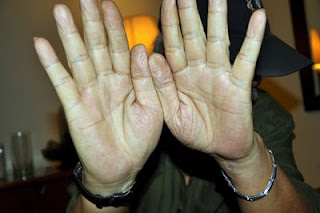 
We were all having an indolent time with the fishermen when someone thrust his palm to me asking for a comment under the dim lights of the wharf and after a casual remark at his sweaty palm the guru who was seated next to me than held up his two hands. The guru had a very rare marking in both his hands, he has a double simian line or in medical term “the proximal transverse palmer crease” and the Chinese call it a “tin cheong” (broken palm in Cantonese).
To have the simian line in any one hand is a rare occurrence and it is very uncommon to have it in both hands and an example of a double simian line (both hands) is Tony Blair, the former British Prime Minister.

Most people have three major lines in their hands which is the life line, head line and the heart line. The Life line is the line going around the thumb, the line in the middle or the proximal line is the head line and the line in the upper palm and usually rising towards the fingers is the heart line. The simian line is the fusing of the heart line and the head line making one straight line across the whole palm.
The simian line has been subject of medical research and first got its name due to the observations that children of Down syndrome have this marks in at least one of the hands as with all the primates and were thus given the Simian line in the early centuries.
Contrary to its name, it has been found that people with simian line have a high level of energy and the ability to focus or can be of single mindedness and because of this ability of high intensity to absolutely focus on a single task that they are often deem eccentric in nature. They also seem to experience much more in life with accomplishments and failures due to the same traits of high energy and intensity and these are the people who contributes to changes in this world through their successes.
From a palmistry point of view the rarity of a double simian line is considered a “gift markings”, it combines the head line and the heart line into one where normally there are two lines representing an amalgamation of energy into one. Where others think and feel two separate experiences the Simian experience it as one.
The owner of a double simian line is a person of high energy and have abundant endless stamina to draw on and he would not understand why you are going back early during a party or even at work and often the last to go whether at work or in a party. (Yes, often he has to be chased out).
This person is often misunderstood as their expression are both from the head and the heart in one flow and what is express could be misinterpreted and vice versa as he could also misinterpret the other person’s speech due to his own listening and especially those whose speech are not from the heart. The Simian can hear the true heart and must learn to trust his inner feelings and to hold back and deliberate on what is separately presented. Many times the Simian’s intensity is misread as anger when it is just that high energy that flows out from him.
The double Simian has highly evolved senses and are blessed with tremendous power and energy and one must learn to harness and control these talents, these would be the exact qualities for admission to the Jedi academy for training by master Yoda.
"My ally is the Force, and a powerful ally it is. Life creates it, makes it grow. Its energy surrounds us and binds us." - Master Yoda -
When a young child is found to have the double simian line (or even a simian line in only one hand although to a lesser degree as compared to the double line) that child is a gifted child and careful thought is required to nurture the child with the right education and to provide a conducive environment as there could be a high energy of creativity waiting to manifest itself into a powerful and exceptional leader.
Note:
Posted by Unknown at 10:34 PM

This uncle so powerful one lah. Better don't make him angry.

So now i notice we are in to fortune telling even Din Merican is quoting horoscope. Must be your influence hawkeyejack.