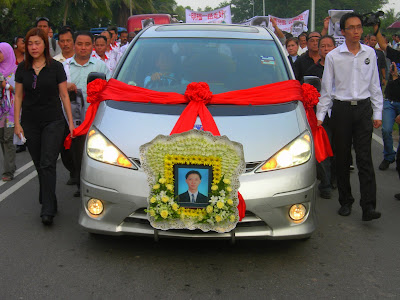 (The Red Hearse which is very unusual and seen for the first time here)
The procession was lead by the Hearse tied with red cloths and ribbons which signify a tragic death and in accordance with ancient rites the colour red used in a funeral is to evoke the spirits of the departed souls to rise from the Hades as in the Chinese mythical stories of the 18 depths of Hades and from the abyss the most ghoulish spirits shall rise to seek out the perpetrators of this hideous crimes and to avenge and seek justice for the victim. In a normal chinese funeral the colour red are taboo and avoided.

But these spirits from the deepest levels of HELL are not your ordinary spirits as these are the most fearsome and are very vociferous and extremely raucous and are wicked, cruel and tormenting as what they inflict upon you are not just death but worst than death itself and they will wreak upon the perpetrators and all their kins for generations to come until an entire wipe out of the clan. And the perpetrators are those that directly cause the evil and those that allow it to happen and those that know but chose to look the other side are also guilty of the crime.


These spirits are motivated for their own pardon and freedom from Hades as the more souls they steal from these evil doers it will goes toward their ultimate release as the evil souls so captured will take their place and will have to go through the torture of hell from depth to depth until the 18th level and after going through all these level, even spirits go mad and there they can remain for hundreds or thousands of earth years as in the nether world time stand still.
Accompanying the red hearse were banners written in red and in days of old it is written in blood even from the corpse itself and the rituals requires for the messages to be written in blood and paraded right through the ceremony and to the grave and the size of this banner length is to cover the entire width or span of the passage. 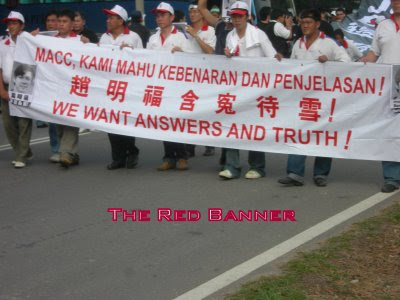 We are not talking of just death here but the stealing of souls from the living and from their children and their children and as a soulless person will lead a painful and torturous life where they wander the earth aimlessly and without compassion that their behaviour becomes a curse to themselves and their family and to society as it is not also about money here as they can even be wealthy or very wealthy as their wealth could be their curse and is seen in everyday life today where the wealthy (maybe obtained through evil doing). And their first level of hell will be here on earth, and this will go on and on until the annihilation of the entire clan or genes. ( i have noted one such soul recently and he is digging his own grave deeper and deeper without even knowing it and he is in Shah Alam).

However of course the evocation must be justified and consent to the gate keeper must be obtained from the God of Hell and he will give his consent if the crimes so committed are true as he will investigate. His investigation are fairly easy and simple as he will invade your slumber and in your dreams or nightmare the truth are discovered. Most of us can sometime recall when we are rudely awaken in the middle of the night in deep slumber from a bad dream and it is said that it is the investigators passing through, lets see how to put this... hmm ok it is as in any investigation they sometime require witnesses and we are sometimes the witness unknowingly like a cctv recorder, the investigators are checking your recording of which you are not conscious of. So don't worry if you have done nothing wrong when you get a bad dream or nightmare, they are just checking your cctv recorder and when they leave they cause you a rude awakening and sometimes you awake in cold sweat....

A lot of times there are some truth in myth and in legends, it is just 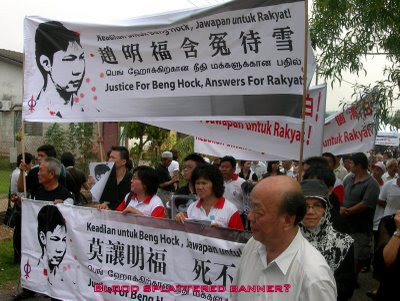 that we are unable to perceive it in a logical manner within the limits of our perception and interpretation. In ancient studies they are all symbolic and a representation of the forces of nature. What are the forces of nature you might ask and simple examples are like gravity, and all forms of energy even nuclear energy as you cant generate what is in the first place not there.

The rituals so performed do not require a belief in them and some are practices brought down from old historical records and in recent times with the opening up of historical archive, information and libraries many of the rites and rituals have been reenacted although some have been changed to adapt to modern culture and even in the western world today there are many such practices are coming to be and what once was considered the occult or magical are today refer to as science and you will be surprised to know that there are much mathematical definition in to such practices which are most inherent in eastern theories as because of its mathematical composition keeping it out from being a taboo occult subject in recent past.

In old Chinese legends the horrible Hell with its howling evil wind and overcast black haze is a world where lives savage ghosts, evil spirits and demons and the supreme governor of this world of darkness is none other than King Yama (also called "Yunliao" the God of Hell by the commoners). King Yama was known to be an upright figure. it was said that he once lead his army to battle and after his defeat he swore to be King of Hell in order to fight the evil doers and to punish the wicked. And King Yama is assisted by two able assistant whose duty was to arrest the evil and they are the famed Ox-headed and Horse-faced Gaolers and they are the ones probably investigating your dreams or nightmares.

So better watch your back and you know who you are that cause the brutal death of Beng Hock as the rites has been performed and the rituals reenacted and the spirits have been summon.

Read PartII : There is HELL

Email ThisBlogThis!Share to TwitterShare to FacebookShare to Pinterest
Labels: Culture, Must Read

The gods and the spirits are now very angry!

Your historical background about the color red is rightly blog here. Hope that those involved within MACC in TBH's death will repent and come forward voluntarily and not to hide behind some powerful hands.

Hope you do not mind my pinching your photos for my blog.

Have you heard of the story of the jilted girl who committed suicide in a bright red dress and that she come back from the dead to take revenge and haunt her lover?

I will reply to your comment in the next posting.

Anon 10.37pm comments have been deleted due to religious intonation.

I read in another thread that the Red Banner signifies a single in the case of Beng Hock. We knew he was supposed to get marry on the same day till "they" interrupter the plan. I think your research and writeup make more sense. I hope the Chinese traditional is true that the murderers are brought to face the King of HELL soon.

Hi Anon 11.03 am,
Sometimes things just happen the way it did and somehow find its relevance either with intention or unintentionally.

The outcry of this crime has reach the heavens and justice will be served.

So from now BN stands for BARISAN NERAK**?

Thank you for your interesting post. Whichever way the guardians of hell may work, Teoh Beng Hock has not died in vain. The perpetrators and the evil masterminds will each receive the justice due to them for the injustice they have wreaked upon this fair land of ours.

For general knowledge and curiousity, I'm wondering what happens if the read hearse was mistakenly used? I mean if the dead was mistakenly taught to be murdered but was not?

I really hope that BH will come back and look for those who did this to him. They should be leave a pair of scissors in his coffin too.

Hi NON Chinese,
You did not finish reading the post as it is explained in detail as to the investigation to be carried out before the spirits are released by the gate keeper. Go read it.

Richard said....
I do not believe that the "people" behind the whole issue is bothered. Look at what mockery they have proven to the world insulting their own race, religion and Malaysians overall.They and their FAMILIES,RELATIVES,CRONIES and the NEXT 3 GENERATIONS SHOULD BE CURSED and if the majority of those being
Marginalised,Bullied,Persecuted wrongly,Murdered ...Pray hard enough AND it just might happen.All the Monies they illegally STOLE and still STEALING,ROBBING FROM the Malaysians,will not help them secure the life they believe is BETTER than Syurga.....
MACC and WHATEVER bodies they set up WILL ALWAYS " look after " THEIR OWN KIND.....The BILLIONS in monies,properties they acquired overseas along with investments gotten from Corruption....will go un-punished...History has shown us...and it started with the recalcitrant.....

Richard said....
I do not believe that the "people" behind the whole issue is bothered. Look at what mockery they have proven to the world insulting their own race, religion and Malaysians overall.They and their FAMILIES,RELATIVES,CRONIES and the NEXT 3 GENERATIONS SHOULD BE CURSED and if the majority of those being
Marginalised,Bullied,Persecuted wrongly,Murdered ...Pray hard enough AND it just might happen.All the Monies they illegally STOLE and still STEALING,ROBBING FROM the Malaysians,will not help them secure the life they believe is BETTER than Syurga.....
MACC and WHATEVER bodies they set up WILL ALWAYS " look after " THEIR OWN KIND.....The BILLIONS in monies,properties they acquired overseas along with investments gotten from Corruption....will go un-punished...History has shown us...and it started with the recalcitrant.....

Hi Richard,
Sorry for the late reply.
Justice will always be served.
Its either served here or later, on the perpetrators or on their descendants to come...

History has shown that justice will be served, always do, just look at Shih Huang Ti, all descendants all gone and many more others evil officers and emperors.