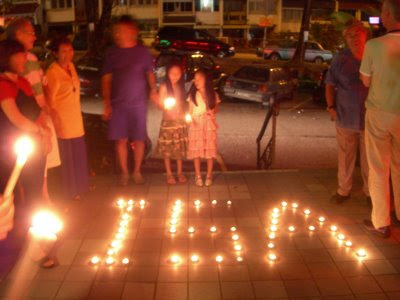 The leader who comes forward to repeal this barbaric and evil law of the Internal Security Act 1960 will forever be embodied into the history book of Malaysia as the father and a champion of democracy, for giving back freedom to the people that he serves and will takes his place amongst the great and righteous leader of world history.

And in contrary those that continue to use and to misuse this evil law will eventually be known and exposed to all in this modern and fast paced world of technology where no evildoing will go unpunished. The old adage that says evil will always return to those that wield it and be upon them and unto their progenies.

We, the people feel for those that is the victim of this wicked decree that has been unjustly used by an unjust law commanded by one or few on to the people just because they stood up for their civic belief of expression and that ignited the wraith of the authority as it just displeases them and only the few of them who act as though that the people are of lesser being and that they act and behave as they are of superior beings and all are to serve and respect them through their power and use of fear.

You the leaders who are servants of the people and the nation be forewarned that this is an evil doing and most of you have come of age and thy time is near for you to return to the soil and the sufferings you impart will rebound back on you and all that is connected to you, the pain of the victims will eventually be on you and as you leave this physical world will you not repent so that the sufferings to be will be lessen unto thyself and thy progenies.

You will see that these leaders were at one time against all barbaric and draconian laws but sad to say that they were not of true faith and not strong enough to overcome the evil when the power is onto their hands and they began wielding it and as such consumed by the evil.

The ISA is one of the most controversial Acts enacted under article 149 of the Malaysian Constitution. Article 149 of the Constitution of Malaysia under which a person may be detained is characterized by subjective language. Such terms as ‘substantial body’, ‘substantial number’, ‘cause to fear’, ‘excite disaffection’, ‘promote feelings of ill-will and hostility’, all embody wide areas of discretionary interpretation. (discretionary here means: up to them)

The first Prime Minister of Malaysia, Tunku Abdul Rahman, defined the purpose of the act as to "be used solely against the communists...My Cabinet colleagues and I gave a solemn promise to Parliament and the nation that the immense powers given to the government under the ISA would never be used to stifle legitimate opposition and silence lawful dissent". The third Prime Minister, Tun Hussein Onn, stated at the same time that his administration had enforced the act only with a view to curbing communist activity, and not to repress "lawful political opposition and democratic citizen activity".

Prior to becoming Prime Minister, Mahathir had also adhered to a critical view of the ISA. In 1966, when Mahathir spoke out in support of the Internal Security (Amendment) Bill 1966 as a backbencher, he stated that "no one in his right senses like the ISA. It is in fact a negation of all the principles of democracy." After becoming Prime Minister however the former premier had little if any hesitation using the law to suppress what he termed racialism but was seen by some as a move against his political opponents, the most notable of events being the infamous Operasi Lalang in 1987.
What is the saddest is that we have so many who volunteered to serve the nations and got elected as MPs (member of parliament) as a representative of the people and all ended up being just rubber stamps for the few who dictates all in the ruling government. Have these MPs betrayed the trust of the people by just playing along so that they get to be promoted or be given more positions? We need MPs with courage to speak up for the people and not hypocrites who thinks only of themselves.
The only thing necessary for the triumph of evil is for good men to do nothing.- - - Edmund Burke

Malaysia Insider reports (dated 29 August) that six more men have been detained under the ISA. read here.
Posted by Unknown at 12:54 AM

Hawk,we need to make a more concerted effort towards the total demise of the ISA, We need to think out strategies to eliminate this injustice. On second thoughts our having a candlelight vigil is too easy a way to remember the detainees. We need something more constructive. Lets put our heads together for this.