Then and Now - Are we better off? 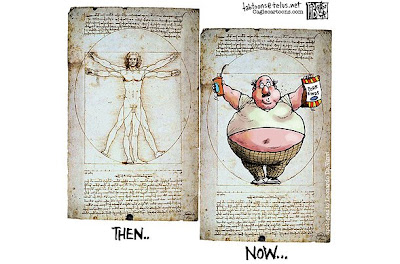 Just came home from an illegal assembly with more than 5 people of fellow bloggers and some bloggees (bloggees are people who spend their free time reading blogs and they only read and does not even comment) and we exchanged views on recent happenings and shared some jokes and funny stories and not to mention we down a few glasses of malt and barley and some 18 year olds.

We came to the topic of the country and began to moan and groan on how much of a laggard the country has been whereby going back to the time when Tun Dr, M first became the PM back in 1981 and that we were than an economic leader in the region way ahead of countries like Taiwan, South Korea, Australia and even way ahead of Singapore as i remembered than the exchange rate was about 1 : 1 and Singapore used to be a cheap holiday destination for us Malaysian whereby we would return with a trunkfull of bargains items of all kinds from fruits, blankets to electricals items, and just compare it today the currency exchange rate is at almost RM 2.42 for 1 Sing dollar! It is no longer a cheap holiday destination and the reverse has happen and that Malaysia is today a cheaper or cheap cheap holiday destination for the Singaporeans and the region. We have now become a cheap country?

A small and barren island state without any natural resources and a small population of approx 4.5 million people has now become an economic power in this region with a leading score of second in the CPI (Corruption Perception Index) as compared to Malaysia at no.43. The general comparison using the CPI is that countries with a high CPI are countries with a strong and healthy economy which is to say that if a country is clean of corruption that particular country will achieve a progressive and vibrant economy and that the wealth in the economy will be better and more efficiently managed.
With reference to Syed Hussein Alatas book of the mid 90s titled "Corruption and the destiny of Asia" whereby he calls it "Tidal Corruption" as defined in brief as corruption that floods the entire state apparatus involving those at the centres of power and like the tide it rises to cover a wider area and immense the surrounding vegetation. Corruption stifle growth and breakdowns socities and inflicts sufferings on its population.

The issue here is that we have been such a laggard in terms of economic growth and that there is much for the country to achieve or to catch up to and that we do not need or deserved to be where we are today and the issues are many from educational standards, to structural and economics reforms. There is so much that the country has been blessed with like natural resources of commodities and oil, and who says we don't have the talent or the intellectuals as every where you can go to you will find Malaysians in the top echelon of the corporations and society and even in the services of foreign governments. We definitely have the talents and the human capital, it is just so that the ruling elites are so engrossed in their internal politics and there are those who says that in Malaysia politics is big bucks and a good way to make a lot of money and yes these are just too blatant and that there are many examples of the day.

Wife is complaining as it is 4.30 am now, got to finish here so the question is where do we go from here? and it is the people who must decide and please remember that your decision only comes into play every once in 4 years or so but than again meanwhile the opportunities do come about and we have to make or let ourselves be heard and that there are many ways and methods to this and remember that every little done culminates to much and sometimes the unexpected burst of force as in the Bersih march as expanded in Haris's People Parliament post "Standing in solidarity with BERSIH". read more here; http://harismibrahim.wordpress.com/2008/06/10/standing-in-solidarity-with-bersih/
So people, come on now, lets get together and let us make a difference ( sounds like a song..) as there is so much that we have lost by fearing to attempt and your silence is interpreted as approval by the government of the day. Just let yourself be heard and there are many ways that are peaceful such as blogs. (haha) and sometimes just a word or two in support of a topic or subject in a blog is a good start. And the more adventurous can and will always be welcomed to take a walk to burn out some cholesterol and sometimes you have to run when they spray water or something (hahaha) but don't worry as it can be good fun and quite exciting.(but make sure you really run).
LET'S GET TOGETHER,
WE CAN BE SO MUCH BETTER!
Posted by Unknown at 3:04 AM

The owner of this blog has a strong personality because it reflects to the blog that he/she made.

Hahaha thank you for the compliments "lotto tickets" actually the owner is chicken and still writing under anonymous or trying to be mysterious unlike others who are at the forefront taking the bullets, but maybe it is easier to write from this point. : )

The roadshow for the petrol hike protest walk will kick off tomorrow by Pakatan Youth starting from Kampong Baru to KLCC.

A similiar activities on the 14th at Seremban.

The ultimate is next month fuel hike protest where the organizers plan a million participant.

Be there to show your support and solidiarity.

The roadshow for the petrol hike protest walk will kick off tomorrow by Pakatan Youth starting from Kampong Baru to KLCC.

A similiar activities on the 14th at Seremban.

The ultimate is next month fuel hike protest where the organizers plan a million participant.

Be there to show your support and solidiarity.