Tengku Razaleigh on Corruption in Malaysia 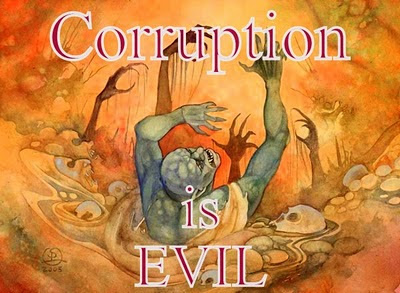 Below is an extract of the speech by Umno veteran politician Tengku Razaleigh Hamzah at the launch of ‘The Shafee Yahaya Story – Estate Boy to ACA Chief’, a book written by Shafee’s wife Kalsom Taib.


The word ‘corruption’ comes from a Latin word meaning ‘to break’ or ‘to destroy’. Corruption is a cancer that steals from the poor, eats away at governance and moral fibre, and destroys trust.

It is time we recognise corruption as the single biggest threat to our nation. In our economy, corruption is the root of our inability to make the economic leap that we know we are capable of. There is no other reason why a country so blessed with natural resources, a favourable climate and such immense talent should not have done a lot better than we have.

In our political system, corruption is the real reason why our political parties refuse to reform. Some people say the party I belong to has debased a once noble nationalism and a concern with the welfare of marginalised people into a rush for the gravy train.

They also said that the economic development we must bring our people is reduced to nothing more than patronage, and patronage is inflated into a right.

Everyone takes a cut
Therefore, it appears that the root cause is in our political parties. It is an open secret that tender inflation is standard operating procedure. Within the parties and among politicians, it is already an understood matter that party followers must be ‘fed’. Politics is an expensive business, after all. Where else are we to get the funds?

Thus, theft of public goods is normalised and socialised among an entire community, and what we had planned to attain by capability is seen by some as something to be attained through politics.

Politicians are the villains in this piece, but they themselves are also trapped. The leadership is trapped because they are beholden to political followers who demand that they are looked after. They demand patronage, and turn the party’s struggle for the welfare of a community into their sense of entitlement to that patronage. So they take their slice of the project.

By the time they and each person down the line all the way down to the contractor takes a lot and there is not enough left to do a decent job, bridges collapse, highways crack, stadiums collapse, hospitals run out of medicine, schoolchildren are cheated in their textbooks. Corruption may look to its perpetrators like a crime without victims, but it leaves a trail of destruction.

No domain seems safe. Some say that the humble school canteen is the domain of party branch chiefs. The golf course becomes a favoured way to pass the cash over. We can place bets for RM5,000 a hole. For some reason, one party keeps losing. And there are 18 holes. Money thus obtained is legal. It can be banked in.

We spend billions on the refurbishment of defence equipment; on fighter jets, frigates and submarines. When a supplier lays on an exorbitant commission to some shadowy middleman, that commission is built into the price the government pays. That money comes from the ordinary Malaysian.

Military toys
Military toys are very expensive. I remember from my time in the Finance Ministry. Even then, patrol craft cost about RM280 million each.

Every time, we test fired one of them, RM2 million literally went out with a bang.

When the UK went to war against Argentina, the UK government tried to borrow them from us because outside of the UK, we had the most of them in the world. We must have been under some extraordinary military threat which I did not understand.

The list is long: procurement of food and clothing for the military, medicine for hospitals and so on. In all these things, the government has been extraordinarily generous. And paid extraordinarily high prices.

Government servants have to face pressure from politicians who expect to be given these contracts because they need money for politics. This corruption is justified because the party’s struggle is sacred. The civil servants can either join the game or be bypassed.

For every government job big or small that goes down, someone feels entitled to a slice of the pie, not because they can do the job, not because they have some special talent or service to offer, but because it is their right.

They do not realise that what they demand is the abuse of power for the sake of personal gain, or party gain. They elect those leaders among themselves who are most capable of playing this game.

So we get as our leaders people who have distinguished themselves not by their ability to serve the public but at their long proven ability to be party warlords, which is to say, distributors of patronage. And that is a euphemistic way of saying that because of corruption the old, stupid and the criminal are elevated to positions of power while young, talented and honest individuals are frozen out.

Game over
Corruption destroys national wealth, erodes institutions and undermines character. And it also destroys the process by which a community finds its leaders.

The consequence of this is that the majority are marginalised. Government contracts circulate among a small group of people. Despite all attempts at control and brainwashing, the majority soon catch up to the game.

This game cannot last forever. The longer it is played the more people hate the government and the governing class. They vote against the government, not for the opposition. They resent the government of the day. In 2008, we saw how the Malaysian people feel about the abuse of power and incompetence caused by corruption.

Since party funding has become the excuse and the vehicle for wholesale corruption, any measure we take to fight it must include the reform of political funding.

It is time we enact a law regulating donations to political parties. Donations must be capped. No donor is to give more than a specified limit, on pain of prosecution. This is to prevent special interests from dominating parties. Such money is source of corruption.

Let us limit political donations by law. On top of that, let the government set up a fund to provide funding to registered political parties for their legitimate operational needs. This money can be distributed based on objective criteria and governed by an independent panel. This would close off the excuse that the parties need to raise political funding through government contracts.

Another idea is that we should freeze the bank accounts of people who are being investigated for corruption. Public servants and politicians are by law required to be able to demonstrate the sources of their assets. Those with suspiciously ample assets should have these assets frozen until they can come up with evidence that they have accumulated them legally.

This may sound harsh, but only because we live in a country in which almost no one ever gets nabbed for corruption. In China, those found guilty are shot.

Impotent MACC
In Malaysia, we read about Malaysian Anti-Corruption Commission (MACC) investigating this and that but there are no convictions. No one has been punished. We are the nation with no consequences. The MACC finds no fault. The courts do not convict. And our newspapers do not have the independence and vigour to follow up.

We have an MACC with no results. It was a good idea to model our anti-corruption agency after one of the most successful in the world, Hong Kong’s Independent Commission Against Corruption (ICAC). However we have taken just bits and pieces of that model. So really this will be no more than PR exercise unless we adopt the model wholesale.

We should repeal the Official Secrets Act (OSA) so that people can go to the MACC and the authorities with documentary information on corrupt practice. As things stand, any document which might be incriminating to corrupt public officials is stamped an official secret. A whistleblower risks seven years jail for being in possession of such documents.

We need to identify rot eating through our roots as a nation. It is corruption. We cannot expect the corrupt to embrace reform. It is time for our citizens to stand up and call corruption by its name, and demand reform.
Posted by Unknown at 4:42 PM

Email ThisBlogThis!Share to TwitterShare to FacebookShare to Pinterest
Labels: Corruption, Government, Must Read