Crime and the City 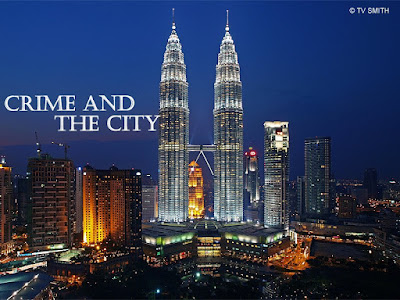 (Photo from TV Smith) [Edit]
Crime and the City

Liza was driving alone on a weekday afternoon last month, about 3.30pm under the scorching Malaysian sun, right in the middle of the city, and came to a stop at the traffic light junction of Jalan Tun Razak and Jalan Ampang, and on her left she could see the Ampang Police Station just next to City Square and Yow Chuan Plaza. She was her usual carefree and happy self listening to the radio while waiting for the lights to turn green and out of a sudden, she heard a loud crash as two men on a motor-cycle had pulled up along her vehicle, and smashed her car window, snatched her folder placed on the front passenger seat, which she had also put in her purse together with some documents. Liza was in total shock and frozen in her car, with debris of glass strewn all over her, and she had minor cuts in her hand and body from the flying glass.

Liza was immediately in fear and had developed a psychological fear from this experience, and could not drive into the city for days and weeks to come, and as she eventually got back to driving out of necessity, she is no longer the same, Liza had changed as she is no longer the happy cheerful driver that she was, and now walks and drive in the city in tension and is constantly looking over her shoulders even as she goes shopping with her friends. Her car radio was always on in the past whenever she drives, but now it is in total silence and never switches on as she wants to be alert for the sound of approaching motor-bikes.

The stories you hear or read in the news are just the incidents of the crime as reported, but the after effect of the victims you don’t get to hear or read much about, unless there are injuries and on many occasion resulting in fatal injuries and death from being a victim of a snatch thieves or a robbery. But for those that survive there is much mental anguish and suffering, which is permanently registered in the mind, and takes much time just to get over it, as the incidents are never forgotten and stay as an unpleasant memory forever. 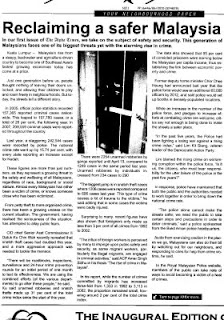 "The Alpha Times", a free neighborhood paper published by the Taman Desa Residents’ Association, and in their inaugural edition of July 2009 had focus on the rising crime rate, and the many recounts of real horrific crime story related by the victims of the community, of which I had scan and posted here and would recommend that you open and view the scan copy of the Alpha Times with Windows Picture and Fax Viewer so that you could easily zoom in, to be able to read the reports or any other picture viewer that you are familiar with. This is a Must Read especially page 1 and 2 of "Danger in our own backyard" as in the image below. (these are current stories on crimes committed within the month and not a collection of old stories, please read on).

You will recall with pleasant memories for people of my generations that in those days, our doors are never lock and that children roam and play freely in neighborhoods. But sadly today the streets tell a different story.

In 2005, statistics recorded 157,365 reported criminal cases nationwide and increased by 26% to 197,780 cases in 2006 and in 2007 there were 209,559 cases and in 2008 there was another jump of about 16% to a staggering 242,544 cases with every state except for Kedah reporting an increase in crime. (And not forgetting the thousands that went unreported for the loathe of spending endless hours in the police station as it is never an easy and comfortable task in the police station). These figures are more than just numbers, as they represent a growing threat to the safety and wellbeing of all Malaysians, regardless of race, background or social stature.


(Click on the news paper image to enlarge it)
It is not only about the statistic and the numbers, as the criminals are also getting more brutal and fearless, and do you know why? It is plain and simple, the criminals gets brutal as they are so afraid that if they get caught by the police, they could be bashed to death and if not half death and it is really a very simple theory, as both are connected, the police and thief, if there are police brutality, the criminals will get more brutal and violent towards their victims, just to avoid getting caught as if they get caught it could be death or they are tortured till their brains go coo coo. So because of police brutality the people will be the greater victim for the sum total of their (police) brutality.

In a civil society, the people who commit crime for reason of money, generally will not go to the extreme of causing bodily harm to their victims unnecessary, and only when they are really pressured or unexpectedly surprised by the retaliation of their victim, however the reverse applies in the case of an oppressive society, the criminals will not hesitate, as the slightest risk of being apprehended, will cause an equal reaction towards the grave threat from the viciousness of being in police custody. If the police are brutal towards the criminal suspects, than the crime on the people will be even more brutal and horrifying.

The suspects (the police brutality are inflicted on the suspects only and not convicted yet) are human too, they are of flesh and blood and have families, just like you and me, and do you think they wish to choose a life of crime, in the general discourse, it is an act of desperation of survival, as making a living has been difficult or getting decent work a scarcity, or it might be that there is an urgent need of money. This is not to say that they are right, but they had made a bad choice out of desperation and frustration, and the system must be able to cater towards their rehabilitation and not to instead bashed them crazy till death or near death.

The government has to take full responsibility for the surge in crime, as in the countries that practice good governance, crime rate are relatively low, as people are well educated within a system of high quality education, that generates virtues and good conduct, and further provides for quality employment where the minimum wage is relative towards the basic existence, that is equal to the cost of living and it will not be at RM.700.00 as the minimum wage today in this country, it is way too much below the basic cost of living especially in the city.

The police department, that is the Police Di Raja Malaysia (PDRM), is in need of a total revamp, and we definitely require new leadership and a new Inspector General of Police (IGP), for the sake of the security and safety of the people of this country, the IGP should make way for new blood and new direction, as he already had his time and tried, and it has not got better, so in all the senses of being reasonable, can we have the respect and dignity of the retirement of this present IGP, and that he must not seek an extended renewal of his appointment and the Prime Minister must have the priority of the people and not extend his appointment.
Read Crime in this Country HERE. (Earlier Post)
Read Snatch Thiefs Story Today HERE. (TheStar 30th July '09)
Read Snatch Thiefs Brothers Die HERE. (TheStar 24th July '09)