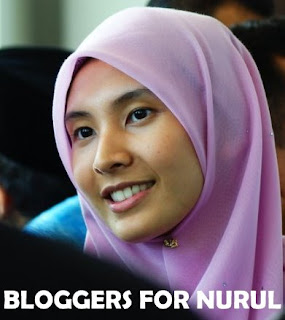 Zorro has called on support for Nurul to take on the post of Deputy President in the PKR party election in his latest posting.
This site will extend its unequivocal support to Nurul Izzah Anwar in her fight for a New Malaysia, for freedom from corrupt, oppressive and regressive governance.
Nurul was exposed to a life in politics at an early age growing up as the eldest daughter of the than Deputy Prime Minister. Things took a nasty turn when she was only 18, she had to face the brutal world of political intrigues and deception when her father, Anwar Ibrahim was being arrested, beaten and imprisoned for trump up charges brought about by the evil Mahathir regime.
She grew up in to adulthood from an environment and atmosphere of constant disturbance and trouble, deprived of a normal family life she had to assist her mother Wan Azizah Wan Ismail with family matters as well as attending the court trial of her father.
The trial of Anwar Ibrahim attracted international criticism against the Mahathir regime and Amnesty International called Anwar’s imprisonment a “Prisoner of Conscience”.
After the court sentenced Anwar to 6 years imprisonment, Nurul still only 18, travelled the international political circuit, speaking out against wrong doings of the Malaysian government. Nurul in 1999 was invited to address the much acclaim Geneva Human Rights Convention in Switzerland.
Despite this entire problem Nurul graduated in 2004 with a Bachelor of Science in Electrical and Electronics Engineering from the University Tenaga National. After her father’s release from prison, Nurul went on to further her education and graduated from Johns Hopkins University with a Masters in International Relations.
In the 2008 general election at the age of 27 and after just given birth to her first child she contested the parliamentary hot seat of Lembah Pantai, Kuala Lumpur where she defeated the formidable three term incumbent Sharizat who was an umno minister in the government.
Nurul Izzah is not your everyday politician, she is a politician made out of the throes of revolution from injustices and oppression. She had risen through her own merit from a passion to bring about change towards a greater democracy. She is a political hero in the frontline dedicated with a burning passion for the well being of the people and for a better society.
She has a strong destiny in the political arena of Malaysia, she is seen to be the fire of the blazing sun that will light the hearts and spirits of its people, and she will be of illuminating quality leading the right in overcoming the dupe statesmen.
Her destiny will be a first as she grows to become the first lady Prime Minister of the country bringing about great cheers as she attracts the talented and the wise to be in league with her leadership to regain the land and rule with the people by her side.

Meanwhile, at present as she dwells on the decision to take on the contest for the Deputy President, her final decision  will all playout in accordance to the path towards her destiny.
Posted by Unknown at 4:35 AM

go Princess go!
we hate Azmin.
We want you to have a big say in how the Party ought to be run - not your dad (sorry!) and definitely not Azmin, the wolf in chicken clothing.
In Zaid you will find and outspoken friend with lots of ideas and right now, before the next general election the Party has to start thinking outside the box (unfortunately this will not happen with you dad, mom and Azmin.

Posted at 435am and yet so lucid and impactful. Thanks buddy.

I will have no problem giving this charming young fighter my fullest support. Zaid makes me uncomfortable and since he is pushing for Nurul makes it looks like a trap. My opinion is her time will come to go straight for the Prsidency instead of the deputy.

Hawkeye, you are my blogroll. For quite while, it was inactive.

All the best to all contestants. Members will decide who they want as Deputy President.

Very eloquent and heartfelt, Hawkeye. Of course, you are not alone in seeing the aura of a greater destiny around this beautiful and shining being, scion of Anwar Ibrahim - undoubtedly a man destined to liberate the nation from the thrall of Mahathir's insidious soul-destroying, predatory personality. It is indeed an incredible story, something straight out of a novel. I continue to admire and support Anwar as the next PM. However, he is up against atavistic forces (like the sultans' self-serving feudal mentality) and we can see that Rosmah is indeed a deadly foe for she is a Gorgon whose very stare can turn men's hearts into stone. In a recent blogpost I compared Nurul Izzah to Tim Burton's Alice, for she alone could slay the Jabberwocky of Ketuanan Melayu with the vorpal sword of courage, passionate intelligence and soul purity.

Is funny that you mention the word "all playout"

I had a long thought and considering a few points and there, I'd say it's worth a shot for Nurul to go for it! And I've thrown my hat in the ring for support!

Nurul is young and intelligent future leader of Malaysia for all Malaysians. But she will have an enormous struggle to fight for justice for ALL Malaysians especially for the Muslim women folks whose rights (as human beings) have been discriminated by their male counterparts as well as their male muftis on religious grounds such as their so-called easy mutiple marriages.

Yes, go all the way and become PM soon!