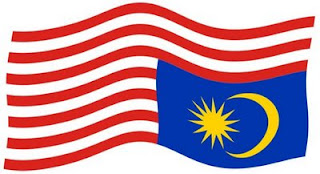 In support of the call by Sheih of Kickdefella (read HERE) to fly the National Flag upside down as a mark of a Nation in Distress.

The BN's promises of reform made since 2004 to give the people greater freedom and equality and a just legal system and prosperity are all empty and hollow and instead we see greater deterioration in all aspect in the management of the country.

The people feels that there is gross mishandling and manipulation of the legal and judicial system and the oppressive laws are being endlessly used to itimidate the good people of this country while criminals and murderers gets to walk freely.

Just got news of a friend ending up in the Intensive Care Unit of the hospital after he was being beaten and chop up by knife wielding thiefs who broke in to his house in Subang and luckily he survived the ordeal with more than 70 stitches all over his body.

Every other day we hear news and stories of break ins, robberies, rape and murders and even today as reported by the NST that a housewife was murdered during a robbery in her home in Johor and a Star report that a 90 year old masseuse was rob and found dead in her home at Klang. What is the government doing about the rising crime rate, people are not safe even in their own homes.

Unsolved murders, crimes, rapes, missing children, and etc and etc and etc and not to mentioned that we also have missing PI and family and missing doctor and family but when it comes to sodomy we are an expert and highly effective and you have prime minister, ministers deputy ministers and the whole dang government making all the call for justice for saifool. @#X&%!

Talk too much and they throw the sediton act on you with every intention of intimidating and scaring the people from talking against them, where is the fundamental basic right for the people, the right to the freedom of expression! Truly a nation in distress!

And about the economy as in my earlier post titled Then & Now we are lagging far behind our neighbours and lesser nations are now catching up with us as can be seen on the rankings of country on the comparison of (GDP) per capita income (the yearly national income divided equally among the citizens) where Malaysia ranks at no. 63 out of 180 countries and for comparison Botswana is at no 59 (4 rankings above) as i remembered Botswana an African country used to be one of the poorest in the world! And Singapore our little neighbor is at no.21 climbing above Japan at no.22. and if there is any comfort we are above Brazil at no.64 and Kazakhstan at no.65 and Argentina at no.66. For Full LIst Go HERE.

Good work! Fly the Malaysia flag upside down. Allah save Malaysia from the corrupted judges, cops and BN Mp's.