Running Out Of Money To Fund a Corrupt Economy 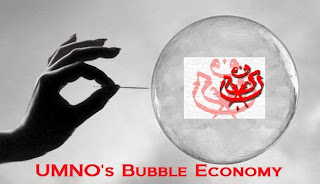 Financial analyst Jesse Colombo, credited by the London Times for predicting the global financial crisis, noted that Malaysia's high government and household debt will lead to a financial crisis.

>Malaysian corporate leverage, which includes corporate bonds and bank loans, is also rising at an alarming rate, reaching 95.8 percent of GDP in 2013 from 79.9 percent in 2007.

>Datuk Paul Selva Raj, CEO of the Federation of Malaysian Consumers Associations (FOMCA), said 47 percent of young Malaysians are currently in “serious debt” (debt payments amount to 30 percent or more of their gross income), something that could catch up with them very quickly.
“Car purchases and credit card debts are among the main reasons for bankruptcy in Malaysia,” said Paul.

>Malaysia’s government has been running a budget deficit since 1999
Like their government, Malaysian households are also binging on debt, which has caused the county’s ratio of household debt to GDP to hit a record 83 percent – Southeast Asia’s highest household debt load – which is up from 70 percent in 2009, and up greatly from the 39 percent ratio at the start of the Asian Financial Crisis in 1997. Malaysian household debt has grown at around 12 percent annually each year since 2008.

Read More Here: http://www.forbes.com/sites/jessecolombo/2013/10/15/malaise-is-ahead-for-malaysias-bubble-economy/
Posted by Unknown at 12:36 AM No comments: Links to this post