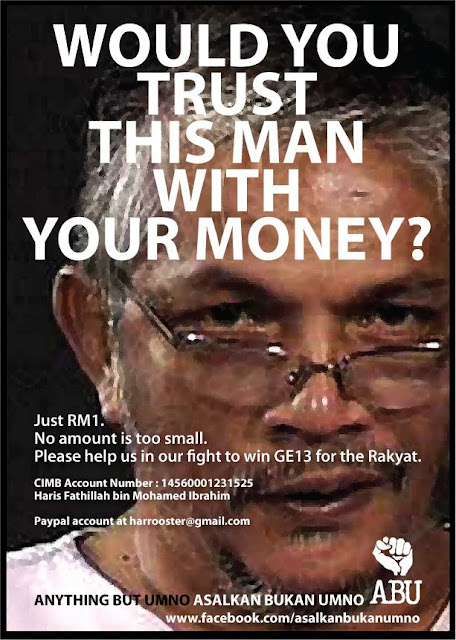 The last few days has been quite a buzz for us as the date of the impending general election is becoming clearer due to recent reports of the automatic dissolution of the various State government starting with the State of Johor on the 21 March 2013.

There is a sudden gush of excitement from our comrades and allies, everyone wants to know how prepared are we going in to this general election. Ideas and plans that were presented earlier are being brought up again and suggestions for it's implementation and realignment discussed in greater details.

As far as GE 13 is concerned, we are with the ABU cause, ABU, Anything But Umno is an initiative by ordinary people of the Rakyat who is fed up with the gross misrule and corruption of the UMNO led Barisan Nasional government. More Here and on Facebook  Here.

At ABU, our analysis show that Winning GE 13 is not going to be an easy task and yet we are presented with the opportunity to throw out this decaying and highly corrupt party once and for all. Umno/BN is at it weakest and losing the moral ground for it's legitimacy to continue it's misrule of our beloved Nation.

We felt that the opportunity has never been greater and the time never better than this. However, it is still going to be a difficult task, it is going to be a tough fight as it has always been anywhere in the world when you are trying to vote out any corrupt regime due to their evil and manipulative ways entrenched after many years of lies and deception to their citizens.

If all is fair and square they would have been voted out long ago, this corrupt regime today controls and manipulate every sector of our institution and every department of government. They owned every Media in the country where it is used to spread their lies and untruth, pitting one community against the other as in such evil ways they maintain their rule. The constituencies have been ridiculously gerrymandered over many years by this umno appointed election commission which has shown blatant disregard despite numerous public outcry and mass protest for electoral reform to reflect a free and just election.

Yes, they rule over us like Lords over peasants of lower class while they live it up sucking every drop of blood from the commoner impoverishing the soul, mind and body of the general populace. the middle class are made to chase after baits set out to lure them away from thoughts of patriotism and nation building, they are made to chase false dreams of a greener pastures in some faraway land. This they do by shouting profane calls for you to return to a perceived motherland as they plant seeds of you trespassing on land of others when it is actually your land, your country and your home.

This GE 13 is not a game, it is the battle for the independence of our Malaysia, for our real Merdeka, to be free from Fear as generated by this evil, to be rid of the traitors that have been selling out our country and our home, to be rid of corrupt governance and thereby regaining our opportunity for true prosperity and opportunities. We need to put a stop to this grand theft of our national wealth and prosperity.

We need your active participation, we need your contribution, nothing is too small as a small drop from everyone of us will contribute towards an ocean, winning back this nation of ours.

There is only one way to Win the GE 13 and that is if you as a Malaysian wants to win it bad enough by taking an active part as a patriotic citizen from now until the election. We have people coming to us now, some have quit their job and some are preparing to take extended leave when election is called to participate in the grand scheme of retaking back ownership of our land. We need many more people on board for this historic event of GE 13.

Winning GE 13 is dependent on everyone of us and we need you on board for this opportunity to become a reality.

Help us Win back this land we call Home.

Contribute to the ABU cause or Join us for a structured approach towards Winning GE 13.
Contact us at: abuvolunteers@gmail.com

Agree. Leave no stone unturned for this last lap to Putrajaya. The incumbent government MUST GO. Do we choose between the ultra religionists' intrusion into non-Muslim's lives or the wanton, blatant corruption that is tearing our nation?

Hi ABU, do you have contacts in UK for us?

What does pr stand for other than against Bn? Pr must define themselves beyond bn and put a stand on issues. For example they cannot condemn bn deficit budget as making the country bankcrupt but they themselves pass a similar deficit budget. Are they for surplus budget? Similarly their stand on free press. All pro pr blogger and media censor contrarian views. Why are they so intolerant of dissenting or contrarian views while proclaiming to believe in freedom of speech. Haris is a typical example. There's too many duplicitous stand. From the treatment I got I'm not surprise that pr will be worse than bn.

Will be making our way to CIMB to give whatever we can.

Would I trust that man in the photo above?

just wanna give opinion. Please open maybank acc. It will be easier for us to donate. Most of us use MBB.thanks
to dear ellese A. I just wanna say i dont agree with you.

No matter what, will do my part to contribute at the soonest.