Crime has reached an unprecedented level in Malaysia. 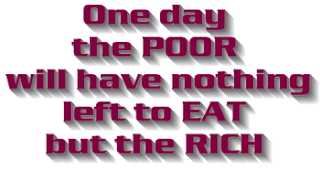 Crime has reached an unprecedented level in Malaysia.
The types of crime being reported ranges from murders, killings, rapes, molest, robberies and street crimes like snatch thieves, mugging, pick pockets, shop-lifting and etc.

These crimes are our diet of daily news, they are reported on a daily basis and have become so common that we take the news for granted. It is so common today to hear and see of crime that we have taken it as a normal everyday event.

Not only are these crimes committed just an attempt to get at your wallet or money be it a few ringgit or whatever you might have on your body that has a monetary value but the crimes reported are horrendous and frightening as these criminals has no qualms at stabbing or killing just to get at your smart phone or handbag.

We are seeing a rise in violent and extremely brutal crime where the victims risk death or violent injuries to be scared for the rest of their life. The victims and families of the victims will have to go through high trauma with extended period of pain and anguish.

We are at the same time witnessing a period where we are seeing crime committed by people in authority by the very people who are to provide security and safeties are instead part of the totality of the problem. We see leaders and people in uniform committing crimes with many reported over this present period.

Corruption is also a crime committed by people in authority and they seem to be able to get away scot free. Corruption is also rising in tandem with violent crimes and funny how history has shown that these two are always in harmony, that is where you find a high level of corruption you will see a high rate of crime and violent crime in that particular country.

As many as there are crimes that are reported there are many much more lesser crimes that goes unreported, most victims loathe having to go to the police station to make a police report as the hassle one has to go through is another form of frustration as a crime victim, one have to spend many annoying and frustrating hours in the police station just waiting and having the statements written or recorded and with such mentality lesser crimes are not being unreported and not reflected in the statistics.

Crime statistics are again kept classified and not easily available to the community, they (statistics) are announced to the public only after being filtered and classified in a complex process that distort the actual facts.

At the local level of the neighbourhood groups, communities and residents associations are deprived of basic information of crime records in the local area, local community groups are not able to obtain local statistics from the local police stations, which should be made freely available so that the residents can make preparations to secure their own community.

No one chooses a life of crime if they have a choice.
We should ask very fundamental questions as to why is there such a high increase in crime being committed by first of all local Malaysians?

Fundamental and established theories are that crime are committed generally in desperation in the attempt for basic living necessities or a desperate need for want of a slightly normal lifestyle like being able to extend a basic smart phone to your growing teenage child or a computer which in this present age has become a necessity rather than just a want and so are the need of many other items which is today a necessity.

The definition for livelihood is not only measured in terms of necessity but in social acceptance, the need to be socially accepted with a life of dignity.

Crime is today a social economic problem, as the failure of policies and a breakdown of social structures with many years of degrading education systems that have been unable to generate a skill sufficient youth population.

The statistics show that we have about 100,000 high school drop-outs every year that did not get through the basic SPM examinations.

We are a country with great disparity in wealth distribution as reflected in the GINI index which is a measure of statistical dispersion intended to represent the income distribution of a nation's residents. Malaysia is amongst one of the worst performing nation in Asia with the most unequal wealth distribution between the rich and the poor. We are worse off than Vietnam, Indonesia, Thailand and Philippines. 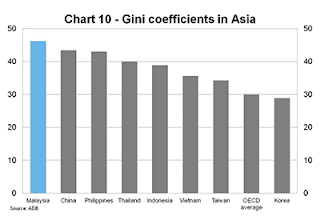 Our analysis shows that Malaysia has 40% of it’s household of about 5 person per household earning less than RM 3,000.00 per month and in our classification these are the poor. We have poverty to 40% of household in this country. Isn’t this amazing? Forget about high income nation when the gap is widening ever so quickly, the rich are getting richer and the poor getting poorer by the day.

And next we have crimes committed by foreigners in the country, we are seeing a huge number of crimes by these foreign nationals today. We have reports of crimes by whole host of foreign nationals from even South Americans like Argentinian, Columbian, Mexican and the like as reported. How did these foreigners get in to this country of ours and why is this a country of choice for their criminal pursuit?

Violent and Brutal Crimes
We are seeing rampant violent and brutal crimes even for petty street crimes, these perpetrators will not hesitate to stab you with a knife or shoot you with a gun.

The criminals behaviour are a reflection of the behaviour of our police force, long have there been a call to set up the IPCMC (Police Complaints and Misconduct Commission) as recommended by the Royal Commission of Inquiry (RCI) in the year 2006.

The IPCMC will see a total revamp in the conduct and processes of the Police force in Malaysia which will hopefully result in a much more civil approach with due process and integration of the law accorded to every single human being.

Any suspected criminals must be accorded due process of the law and the abuse of the force in exercising brutality to many as reflected in the many unexplained death in custody must stop.

Criminals reflect the brutality of the authorities as in the contemplation of the suspect that it will be sure death or a torture more painful than death if they are to be caught or arrested and such reflection will cause the criminals to be much more brutal to avoid arrest at all cost.

Solution?
We feel that we might be just too late, maybe there is still a chance if enough Malaysians wake up to this fact.

We will soon be going around again presenting the SIA and we hope to receive your support and hopefully see that it could be implemented in the near future.

This might just be the solution that can Save Malaysia.

Read More Here: Social Inclusion Act
Dialogue with political parties on the SIA
More on the Video of the SIA
Crime Watch Malaysia on Facebook