Malaysia - The Dark Forces of Corruption

For the first time in more than half a century, Malaysia's corruption-tainted ruling coalition - which has held power since independence from Britain - looks like it could be in serious trouble. No political party in the world has been in power for longer than the United Malays National Organisation (UMNO).

But now an opposition victory on Sunday promises sweeping change for nearly 30 million Malaysians and for the foreign investors who have helped transform the country into one of Asia's leading "Tiger" economies... against the odds.

Against the odds because Malaysia is a country where corruption is endemic. Big corruption. The opposition, led by former deputy prime minister Anwar Ibrahim, has campaigned for clean government - and it could yet turn out to be a winning ticket.

Malaysia has an appealing edifice of modernity and sophistication.
But when it comes to corporate bribery, that image shatters. The country was last year ranked the world's worst offender in Transparency International's bribe payers' survey. Many Malaysians were shocked by this, though unsurprised... if it's possible to feel both at the same time.

Another survey last year by international corruption watchdog Global Financial Integrity ranked Malaysia as the world's third largest source of illicit financial flows - an estimated US$285bn in capital flight in the decade up to 2010.
An untaxed financial haemorrhage, depriving the exchequer of funds that could have been used to improve Malaysians' living standards.

But over the past few years, Malaysians have also seen their corrupt officials exposed, one after another. Some scandals have been about little brown envelopes or vote-buying. Others have been pretty exotic.
One even embroiled the man who is now Malaysia's prime minister in a murky saga involving the mysterious murder of a Mongolian model and alleged kickbacks on French submarines.
"At one point it was a scandal a week," Ambiga Sreenevasan, former president of the Malaysian bar council, told Channel 4 News. "People are truly sick and tired of it, and the sheer amount of money bleeding from the system."

At one point it was a scandal a week. People are truly sick and tired of the sheer amount of money bleeding from the system.Ambiga Sreenevasan

Dato' Ambiga now heads Bersih 2.0 - a group campaigning for free and fair elections - whose name means "clean" in Malay.
Bersih wants an end to corruption and to stop dirty politics. "Since 2008, we've had a strong opposition and they've raked up so much dirt, exposed a lot of misdeeds of public officials. Everyone knew it was happening, but to see the details? It's horrified everyone."
One particular scandal has horrified more than most. It has exposed corruption on a grand scale and has, in Ms Ambiga's view, "disgusted voters."
Read the rest of the Report by Channel 4 News of UK here: http://www.channel4.com/news/malaysia-elections-the-vote-to-stamp-out-corruption

Posted by Unknown at 4:23 AM No comments: Links to this post 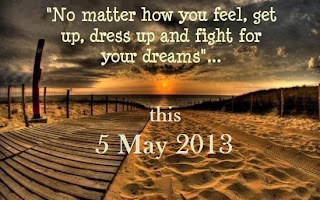 As we approach the day of reckoning for these bunch of crooks in our government, be prepared to see some desperate attempts to scare you from going out to the polls and in trying to get you to stay indoors.

These crooks are incapable of change as they will do what they do best which is to get your vote by hook or by crook, we have seen and should be very clear by now as to their approach, they either try to bribe you or scare you and that's their inherent characteristics as this is the only way they know how.

They are completely void of any principles and integrity being mired in a system of their own creation over these many years of complacency as one of the longest ruling power in the world.

In their system of wealth sharing where the wealth of the Nation are distributed in a partnership of a coalition of bands of bandits where each takes on a territorial or departmental allocation in accordance to the long established power sharing formula.

We should be prepared as we approach the day where we exercise our real power to vote, but our duty as citizen do not stop at the voting box, we have done much over recent years, we are now wiser to their vile trickery and have stood up in unity overcoming the veil of anxiety and fear from their unjust laws and enforcement.

They will step up on the fear creation in an attempt to cheat you of your vote and that is their objective, before that they were all out in baiting you with carrots and in bribery trying to buy your votes in exchange for sweet nothing.

Be prepared and once again to show our strength in unity as brothers and sisters, we will need to stand up and fear them not as we need to be there watching over and defending the sanctity of our electoral system.

Crooks being crooks will cheat you and swipe you off the minute you turn and that is why we will need to take watch and be on guard.

This is the final countdown and it is as much a day of reckoning for the Rakyat as it is for these crooks, this is the test that will show whether we are truly united and seek to see the change that we so desire.

We have come far and many had put in much time and effort for this day to happen and it is now within our grasp and for us to realise our dream of a better Nation free of corruption and injustice, for the sake of our children and theirs to come We Must Face This Final Battle on the 5 of May 2013.

Go here if you need guidance on polling day: http://asalkanbukanumno.com/
or here: http://harismibrahim.wordpress.com/2013/05/03/defend-your-polling-stations-and-we-take-putrajaya-on-5th-may-2013/

Posted by Unknown at 5:26 AM No comments: Links to this post

Posted by Unknown at 3:09 AM No comments: Links to this post

Posted by Unknown at 3:03 AM No comments: Links to this post 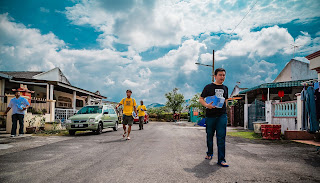 We have made an impact.
I’m not talking about stickers and graffiti. I’m not talking about crowds of people wearing our t-shirts (although there were a few). I’m not talking about ABU flags, caps or badges (we have produced nil).
I’m talking about substance – about the ABU message; about awareness and hope being spread among the common folk and fear among the UMNO elite.
My Distribution journey brought me back to several constituencies that we have visited before for Walkabouts.
Even two weeks feel like an eternity when you are on an election campaign, so I was impressed that people still remember our material well. Let’s just say I didn’t expect kampung folk to recite facts, dates, numbers from our material back to me.
When you get out of your car in Beruas, two hours off the PLUS Highway, after driving alone in a thunderstorm, and the local 60-year-old pak cik you ask for directions tells you, “Ohhh you dari ABUUU … saya dah baca risalah ABU. Ada lagi dalam van?” … One word: MAGIC.  ~ from: KaVee Yong ~

When we first met KaVee he had accounted that he is suffering from gout and that it was a genetic inheritance and as such he had thought that he could not be much in participating to the Eagle's walkabout.

Let us share with you here that KaVee had walked and covered as much and more, he is every bit a Soaring Eagle as he had taken the mental stance of wanting in participation in bringing about change and believed that he could contribute, this deep felt belief had enabled him to overcome all obstacles in many aspect including that he worked down south in the little rich Singapore.

He made the journey home every Friday right after work and participated in all the ABU weekend events and activities, he had all the inherent strength of goodness and had developed a  strong passion to seek positive change for his Nation.

KaVee typifies that when you had a clear and conscious awareness of your desire you will be able to draw all positive energy in overcoming any negativity or obstacles in your life.

There are many in within the Eagles who are able to Soar beyond their expectation and we had secretly admired and felt great pride in their contribution with many a times we had felt the pull of the heartstring.

Thank you Eagles, you had made all this fight worthwhile and we look forward to the 5 of May when we can all gather as one and hold hands in camaraderie.

Meanwhile we have 3 more days of work and let's give this days our all in this final battle for our homeland.

Posted by Unknown at 12:27 AM No comments: Links to this post