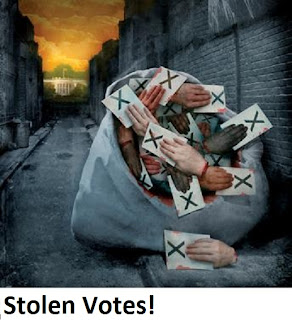 These are serious evidence on attempts to dilute the votes of Malaysian and this is High Treason, a criminal act to dilute and steal the Votes of the Rakyat!

As reported by Malaysiakini:

Activists claims that a party out to investigate an alleged scam in Sepang, Selangor to register foreigners as citizens and voters, was “attacked” in their car in the process.

The party (right), consisting members of Jingga 13 and PKR Youth along with reporters fromSelangor TV, went to a resort in Sepang yesterday evening on a tipoff that four busloads of foreigners were being brought there allegedly to be given Malaysian ICs in order to be registered as voters.

“At that time, our cars were attacked, hit and kicked by several men, who demanded we come out,” said one of the activists on Jingga 13's blog Milo Suam.

“In the panic that ensued, we managed to take a photograph of one of the attackers."

According to a relatedTV Selangor report, the attack took place at 6.20pm, and that while the cars sustained some light damage nobody was hurt in the incident.

According to Milo Suam, the activists said they had earlier found three of the buses mentioned parked along the road leading to the resort, close to a cafe.
Another had already left for the resort.

The activists spoke to the three drivers (above), who reportedly confirmed that they were ferrying foreigners, mainly Indonesians.

Yet another entrepreneurial course

Following this, several PKR Youth members and a Jingga 13 member went to the resort under the pretext of seeking accommodation, but were turned away as the resort staff claimed they were closed.

Camping out at the café nearby, the group sent another two cars to the resort half an hour later.

“It was drizzling at that time. We saw roughly 50 people gathered on the left part of the resort, who looked like foreigners.”

The activist said people identifying themselves as organisers of an “entrepreneurial course” that was in progress, approached them asking them to leave the premises.

“The minute we tried to come out from our cars, suddenly several big sized, bald men in white came towards the gate. It seems they were trying to close the gate to stop us from leaving.”

As the cars started to slowly move out they were attacked.

The men allegedly kicked and hit the cars and pounded the windscreens, shouting at them to come out from their cars.

After fleeing their attackers, the party drove directly to the TV Selangor office in Batu Tiga Shah Alam where upon checking, they found the reporter’s car had sustained slight dents as a result of the attack.

Unfortunately, they said, the TV Selangor reporter did not manage to film the incident.
According to the blog, the group lodged a police report on the incident last night.
Two weeks ago, Malaysiakini reported a similar group of foreigners at a resort in Putrajaya. Interestingly, the six buses which were ferrying the foreigners were escorted by the police.
However, the National Registration Department (NRD) has denied allegations that that it was involved in a programme to grant citizenship to foreigners.
According to the police, the foreigners were also taking an"entrepreneurship course".