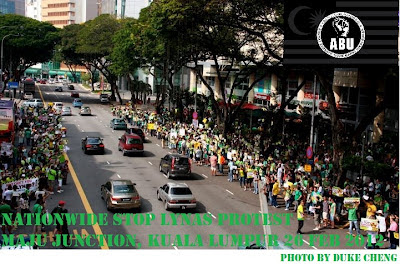 The In Solidarity Nationwide Protest in Support of Himpunan Hijau 2.0 in Kuantan against the Lynas Rare Earth Plant is to be held today the 26 February 2012, Protests will be held in major cities all throughout the country. The Kuala Lumpur protest was held at Maju Junction, Jalan Tuanku Abdul Rahman, Kuala Lumpur starting at 9.30 am.

We arrived at about 9.15 am and were pleasantly surprised to find a crowd of about 500 had already gathered and different groups are already starting their own activities some were singing accompanied by their guitars, some were making placards and flash mobs acting out and other activities.

By 10 am the crowd had grew to more than 2000 and the crowd swelled to a peak of about 3000. There was quite a big group of protest cyclist that were cycling around the venue with Anti Lynas signs, flags and T-shirts.

The people than lined up on both side of the roads to demonstrate to passing traffic with cards, posters etc, the cars responded by honking in support. The crowds was constantly chanting Stop Lynas, Save Malaysia alternating with Hidup, Hidup, Hidup Rakyat, the protesters was trying to out do each other from the other side of the road by their chanting.

The interesting part is that this protest which was solely organised by civil society and other individuals did not include any political parties and their members are not present in this event except for the visit of Charles Santiago from the DAP, the MP for Klang and Dr Dzulkefly Ahmad of PAS the MP for Kuala Selangor.

At about 12 PM, Haris Ibrahim gave a small speech thanking the people for taking a stand on events of the nation and for their support in showing up for this protest, Haris ask the people whether they will show up again and protest till Lynas close shop and the crowd roared to a resounding Yes and he finish off by calling an end to the event.

We are very pleased with the whole event and would like to specially commend the police for their cooperation, understanding and assistance, they had even occasionally send a plain clothes policeman over to advise the coordinators on crowd control even taking patience to explain the reason why such advise was extended.

The policemen was mostly just standing at a comfortable distance away watching and directing incoming traffic and was not at all intimidating. Well done to these police officers.

The people who turned up in this protest had a most pleasant and enjoyable time. The protesters themselves was happy to be able to exercise their rights to express an issue of national interest. At the end of the event we had a chat with some of the protesters and found that quite a number of young adults are participating for the first time in a protest.

The government should just accept this fact that Lynas is not wanted here by the Rakyat and not to be manipulative and defensive. Lynas is not wanted here, there is no need to be defensive by saying otherwise, the people in BN should accept a very simple fact is that, the people are not stupid especially in this modern age of internet and computers.

If Lynas is so good they will be operating in Australia as the raw materials are all from there.

Video of the Protest by MobTV HERE
More Photos of the event by Duke Cheng HERE
More Repoert by FMT HERE
Posted by Unknown at 5:17 PM