SAVE YOURSELF STOP LYNAS! Be there this Sunday 26 Feb 2012 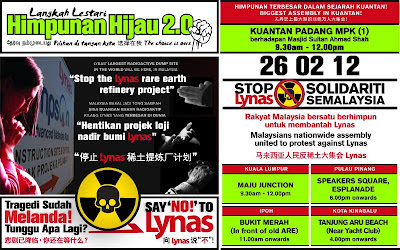 A group of NGOs and civil society groups today warned the public of the “devil” – Lynas Corporation Ltd – that is waiting to “kill every Malaysian” and not just the residents of Gebeng, Kuantan.
At a press conference organised ahead of Himpunan Hijau 2.0, the nationwide anti-Lynas rally this Sunday, the groups said that the severe repercussions of the Lynas Advanced Materials Plant (LAMP) has made it a national issue.
A nuclear physicist and the Green Coalition Party committee member, Ahmad Bungsu Hamid Tuah, said that Malaysians outside Kuantan were in for a bad shock if they thought they were safe just because they lived outside the LAMP postcode.
“When the Chernobyl disaster took place the radioactive particles were carried by the wind all the way to Scotland,” he stated. “The rainwater that was infused with those particles fell onto grazing fields and the sheep ended up being polluted.”
“These same particles at the huge toxic dumps in Gebeng will also be carried by the South China Sea winds and monsoon rains across West Malaysia. So don’t think you’re safe just because you don’t live in Kuantan.”
Ahmad Bungsu, who has worked on projects involving radioactive waste management and toxic waste disposal systems in America, also said that the nuclear radiation from LAMP was no different from that in the Fukushima and Chernobyl disasters.
In fact, he added, the radiation expelled by LAMP would exceed the levels of Fukushima. On top of that, he claimed that the cost of decommissioning the plant 60 years later would be five times the cost of building it.
Read More HERE
Posted by Unknown at 1:50 AM