Please be there for the Future of our Nation 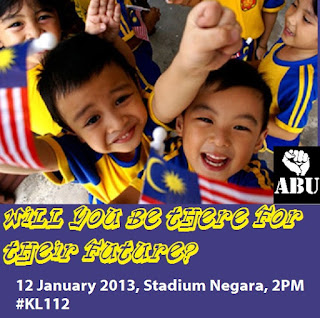 The Himpunan Kebangkitan Rakyat rally scheduled for this Saturday the 12 of January 2013 is not just another protest, it will probably be the last major protest before the oncoming 13th general election which is expected to be called in the month of March 2013.

This is one protest rally you must participate in and bring your whole family, friends and neighbors with you, this is a rally that must stamped it's mark in the history of our country, this rally must show the might of the rakyat united across all creed, race and religion.

We must show our strength in unity as one people in one nation and there are no option but to be successful in this rally in bringing in the numbers required to show that we are serious and a formidable force in sending out the message that we want our country back and that we are the true owners of this nation.

This is our land and we are the rightful owners not any political party trying to rule roughshod over us, when we as one Rakyat says we don't want it, it should be a finality and that we are not interested in excuses and gross disregard of our wishes and if we are not comfortable with any project in our land it should be a finality and the government of the day as our servant should heed such request and not bulldozed it through with gross disregard of our wishes and concerns.

We are today in a precarious point of our nation and on the edge of total collapse if we do not do enough as one people and if we fail to show our strength as one nation united, my fellow citizens it might just be too late, and the inevitable will happen and it will just be too late as many lives will be in danger, many innocent victims which might just be anyone in within your family and friends will fall to the occurrence of a clear and present possibility if we still do nothing or not doing enough to save our families, home and country.

The writings have long been on the wall but we chose to turn a blind eye, it is so clear that we chose not to see and flow along in the acceptance of the superficial illusions of evil magicians that have shape and separated us by causing distrust, we are so gullible to the many distraction and diversion that takes us from the truth of the presence.

For the past five years since the turn of tide of the 12th general election of March 08, 2008 we have witnessed the accelerated decay in the governance of our beloved Nation, from rampant Corruption that has been consistently highlighted in the alternate media and the auditor's general report to blatant murders, ceaseless crime of robberies and attack on innocent victims which we read about everyday, murders are occurring on a daily basis, rampant crime, rape and kidnapping reveals right before our very eyes.

Yes, right before your eyes they appear as you witness rape, robberies and violent attack on us the ordinary Rakyat, it is no longer safe in our streets and our homes, even in crowded malls, crime are happening in broad daylight right before your very eyes.

Today you can just view the endless videos on you tube of recordings of these crimes as described, we know as me and my comrades have been monitoring such hideous events for years on end, just visit us on "Crime Watch Malaysia" on facebook for starters.

These evil events are occurring in such high frequency that you have taken it for some form of entertainment albeit unconsciously, yes we have inadvertently turn a blind eye as one of our fellow citizens fall victims to such a horrendous crime, how can some of you ever get to sleep and go to work the next morning just after watching such a video of a fellow rakyat victim of evil, yes you can choose to avoid and not watch these videos if you wish but it is real and it is rampant.

Are these not "Writing on the Wall" that is telling us that something is very very wrong here, what more evidence do you need, i really don't know. Please i beg you not to wait until something happen to your family, friends and relation before you wake up.

We need to take action now before it is too late, we need to participate and show our might as a Rakyat united. We need to get SERIOUS and show a grave and somber disposition in our action and participation.

The #KL112 is not just another protest rally, it is a rally that might save us from grave danger, and how if you might ask, the answer lies in our ability to show these humbugs politicians to stop fucking with us no more, we are serious and we mean business and this can only be achieved if we are able to show significant numbers this Saturday.

Everything is falling apart and we have not even touch on the gross mismanagement of our economy here in this writing but you already know the facts and figures as they are all over the internet.

This is an everything protest from demanding for Clean and Fair Election, a Green Environment to Equality and Justice as represented by the participating bodies and movements.

This is a life and death rally, my fellow Malaysians, this is a rally that might save the future of our children and their children. It is for just a few hours but this few hours can set the terms and send out an unequivocal message and generate respect and fear of us, the Rakyat. We must show our MIGHT as one people and one nation this Saturday otherwise they will again bulldoze us through the GE13 and then it might just be too late.

This combined pressure will go a long way and established the fact that we will take no nonsense in our demand for free and fair election and if they would to cheat us during the GE13 we will be out in bigger numbers and march them out of Putrajaya.

Please be there this Saturday and show them that we mean business for the sake of the future of our children and their children.