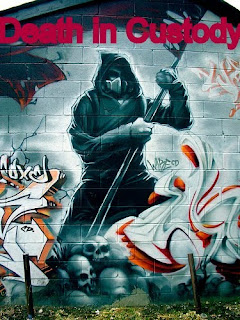 Malaysia in a Humanitarian Crisis?

Today six more migrants die in detention!
Malaysia will soon be famous for "Death" with the numbers of people dying in detention. The nation made world headlines with the death of Teoh Beng Hock and till todate there has been no outcome from police investigation although an inquiry is being held and is on going.
It looks like the authorities are at a loss at how to resolve all these problems which  may now be in a crisis situation. The numerous  and repeated complaints and reports made by international and local humanitarian institution had fallen on deaf ears and it seems the government is still in denial or either in defiance as no solutions or any attempt to correct this inhuman situation have been presented.
Instead of facing up to reality and attempting to improve and rectify, we seems to be in denial and in pretense that everything is rosy and beautiful and just shove all problems aside. This is a humanity problem  of catastrophic proportion today, and we are talking about the life of a fellow human being that has a face, a mother and father and children and relatives just as you are.
We don't need to send Malaysians to outer space, We don't need Formula1 Racing , We just need to be more Humane and Caring as a people and a nation.
News Report from Associated Press Sept 25 2009
Today six Myanmar migrants have died while in detention in Malaysia because of a suspected waterborne disease caused by rat urine.
The immigration department official says the six men - detained for being in Malaysia illegally - fell ill last month. They died in hospital days later. All six had complained of severe internal aches.


The official said on Friday the detainees were believed to have contracted leptospirosis, a disease from water contaminated by rat urine.
He said the detainees likely contracted the disease in another centre. They were transferred together with some 700 others after a riot there.

In May and June 2008, migrants told Human Rights Watch researchers how RELA members abused them with impunity during detention and in the immigration detention centers where RELA is responsible for security. Abuses include physical assault, intimidation, forced entry into living quarters, extortion, theft, destruction of residency papers, and sexual abuse.
Testimonies from migrants, refugees, and asylum seekers deported from Malaysia to the Thai border indicate collusion between Malaysian immigration officials and human smuggling gangs who charge steep fees to facilitate deportees' return to Malaysia or back to Burma. -- Human Rights Watch.
Stop Caning Migrants - Amnesty International
must immediately stop caning people, a punishment widely used against immigration offenses, Amnesty International said. Malaysian authorities caned at least 34,923 migrants between 2002 and 2008, according to prison department records aired in parliament.

Caning is a form of cruel, inhuman and degrading punishment, prohibited under international human rights law. The practice is humiliating, and causes such pain that people have reportedly fainted. Those caned often carry scars, psychological as well as physical, for years.

The severity of the pain and suffering often means that whipping is in fact a form of torture. Since amendments to the country’s Immigration Act came into force in 2002, 47,914 migrants have been sentenced to caning for immigration offences.

Amnesty International urges the Malaysian government to rid the country of this cruel punishment. Whipping someone with a cane is cruel, inhuman and degrading and international standards make clear that such treatment constitutes torture. -- Amnesty International.
"Someone please wake me from this nightmare and tell me that this did not happen in my country"
- Yasmin Ahmad -
Read Stories of Custodial Death HERE and HERE
Posted by Unknown at 4:36 AM