Malaysia in the Year of the Snake 2013 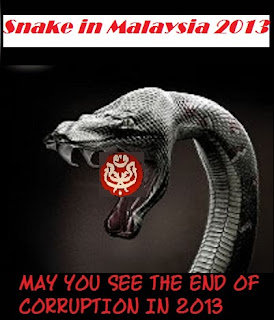 This is a continuation from the earlier post on the cycle of the Year of the Snake 2013.

The cycle for Malaysia in the year of the snake has shown us that this cycle denote great change that has an impact on the Nation.

We start the cycle from pre-merdeka years of 1941 a snake year with the element of metal in accordance to chinese astrological cycles which saw the Japanese occupation of the then Malaya during World War II.

"Study the past if you would define the future" - Confucius

1953 (Water) - Before merdeka of 1957, this year saw the formation of the Alliance coalition party comprising umno, mca and mic which later became the Barisan Nasional. This event has now come to the end of it's cycle due to it's inertia and for it to continue an new energy is required to drive it to the next cycle.

1965 (Wood) - Another significant year of change for the Nation which saw the separation of Singapore from Malaysia.

1977 (Fire) - A state of emergency was declared in the state of Kelantan which led to the expulsion of PAS from the Barisan Nasional. Read more Here.
-Another event of note was the crashed of a hijack MAS plane in Johor Bahru.

1989 (Earth) - A year of great disturbance following the constitutional crisis that led to the sacking of the lord president in end 1988. It was a year where the independence of the judiciary was dismantled.
-Signing of the peace treaty with the Malayan Communist Party.
-Another plane crash in this same cycle, A Boeing 747 crashed 12 km from Subang International Airport.

2001 (Metal) - Kampung Medan Ethnic Clash
- It was also the year of the September 11, terrorist attack in the USA where 2602 people were killed including 3 Malaysian.
- A "Fireball" UFO was spotted near the second link that joins Malaysia and Singapore.

This year 2013 (Water) - We had already witnessed the incident of Lahad Datu.
- The major event will see the 13th General Election and what waits for the end of cycle of the Barisan Nasional government. We will soon know this 6th of May 2013.