We Want a Clean and Fair Election 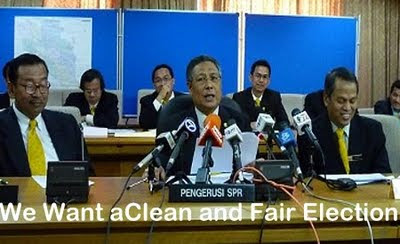 Bagan Pinang is one of the four state seats in the parliamentary constituency of Teluk Kemang in Port Dickson of Negeri Sembilan and the only state seat held by UMNO in the Parliamentary of Teluk Kemang. The Election Commission has fixed October 11 (Sunday) for the polling day and nomination of candidates is on October 3 (Saturday). There has been inconsistency in the fixing of polling days in the recent past few by-elections with polling days being fixed on a working weekday in opposition held seats.
There are a total of 13,644 registered voters in this state by election of which 4,604 voters are registered as postal votes making up a big share of 33.74% of the total votes. There have been many constant grouses on the anomalies of postal votes and one of the concerns raised by Bersih (Coalition for Clean and Fair Election) an alliance of about 70 civil society organization and several political parties which held a mammoth rally of about 100,000 peaceful protesters in November of 2007 calling for clean and fair election.
Bersih’s concerned with postal voting, limited to police and army personnel, and overseas students. In the General Election of March 2008, more than 221,000 voters use postal votes, but the tallied votes are not necessarily counted among those from voters’ home districts. Although the Army Div 2 Base in , , houses only a security guard, some 500 voters are registered to that address. A lack of transparency raises questions about how votes are assigned, including concerns that they may be arbitrarily allocated to benefit districts where the vote is close.
I will like to highlight a few salient points from Dr Mohd Raflick in his article from the blogsite Right2Write  as below:
Extract of an interview by R.Nadeswaran and Terrence Fernandez of the Sun with Anwar Ibrahim on the 27 March 2008 after the General Election of 8 March 2008 on postal votes as follows:
Nades: Should the postal votes be abolished as we are not at war or in emergency. It was (mostly) meant for our servicemen in the jungles during the Emergency and the war against the communists.

Anwar: No. Postal voting can be conducted in a transparent and fair manner. These people … they virtually have robbed the people of their votes.
Like in Setiawangsa (which was won by Datuk Seri Zulhasnan Rafi que) … we won. Then came 14,000 postal votes.

Terence: We cannot prove this but is there any truth that in Lembah Pantai, where your daughter Nurul Izzah was contesting (and won against Datuk Seri Shahrizat Abdul Jalil), there were similar attempts?

Anwar: Yes. But there was not enough to go around. In Teluk Kemang 7,000 postal votes were brought in, still our guys managed to win.
Which means the number supporting us is big. That’s why I said, we will win if we get 55%. Even during the campaign I said you want to win with 50%, forget it!

XXXXXXXXXX
Malaysians from all quarters has called for greater transparency in the voting process from postal votes and this cannot be further ignored or swept aside by the Election Commission and the Government. The people is calling for transparency and will no longer tolerate any anomalies, all votes must be counted and witnessed by the people and this is an ultimatum, we want to see our votes being counted.
Prof Dr Mohamad Agus Yusoff of Universiti Kebangsaan said the EC must convince voters that the process would be fair and impartial as postal votes accounted for 33.7 per cent of 13,644 votes in the constituency. He said the opposition would create a perception among voters that the postal votes would be manipulated by Barisan Nasional (BN).
Datuk Seri Abdul Hadi Awang also voiced doubts over whether the results of the by-election would truly represent the people’s choice, in view of the high number of postal voters in the constituency. Abdul Hadi said that if the EC revamped the system and allowed postal voters to cast their votes like any other constituent, this would ensure some amount of fairness, transparency and democracy in the voting process.
“We want them (postal voters) to even be given the right to attend political campaigns and ceramahs without being stopped by certain quarters.
“If possible, we want political parties to be allowed to come and keep watch over the postal voting process and we want their votes to be kept truly secret,” he said.
Human Rights Watch had in 2008 called on national election monitors tn Malaysia to thoroughly investigate any claims of electoral fraud and irregularities, and to provide for greater transparency by posting vote tallies outside polling stations before votes are transferred to the Election Commission.

Email ThisBlogThis!Share to TwitterShare to FacebookShare to Pinterest
Labels: Government, ISA and Human Rights, Must Read, Politics and Election

Dirty and unfair are the viagra for umno to stay in power. Take away these, they become potent.

Thanks zorro, we have to change the system and they must give us complete transparency on the polling process.