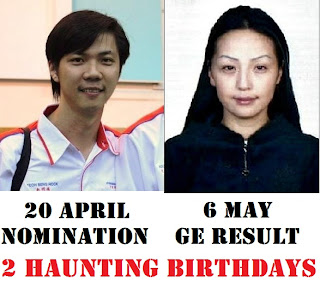 It was a weary night on the eve of nomination, i had finished a session with some new volunteers and got back just after mid night.

It has been an increasing variety of activities after the dissolution of parliament these past weeks but somehow this night seem different, maybe it was the excitement in anticipation of the nomination of candidates made worse by the uncouth behavior of the Registrar of Society in the affairs of the DAP.

Strange night it was, as you felt the strains of collective non stop activities but somehow the mind is still actively buzzing and you can actually hear  the buzz when you laid back in to the easy chair just to rest the eye.

The thought of sleep did not occur and as you sit behind the lcd screen logged in to this timeless cyberspace going through past unread emails that had pile up meandering between news site, social media and emails.

The combination of weariness and of being wary of the outcome of nomination which has been troubling us for quite a while, as usual our politicians are mostly short sighted and there were a host of problems unresolved and our annoyance and frustrations have been disturbing on the avoidance of three cornered fights.

In the midst of all this buzzing in the head, you will somehow settle in to the alpha frequency of the mind, it is a stage of activity in drowsiness and a part meditative state of mind where your sub-conscious leads you to a cosmic flow in through the endless cyber universe in within the expanding universe.

I had strangely stumbled on to this dates during this haunting hour on the eve of nomination, the haunting hour or also referred to as the hour of the wolf made popular by an old movie in the 60s, which falls in from 3 am to 5 am.

This is a strange haunting coincidence as the dates for nomination falls on the birthday of Teoh Beng Hock, 20 April and the polling date as set on the 5 May and the results of the 13th General Election which will be officially announced after midnight which will be the 6 May, the birthday of Altantuya Shaariibuu.

According to the ancient philosophers this will be an "omen" and in days of old when the army marching our from the city to battle, any slight signs or observations are closely watched, analysed and interpreted by the civil corps who will accompany the army and this is especially so in ancient China.

The nomination day is akin to the ancient days of old where the General or Commander are officially appointed by the courts and ceremoniously march out from the city with arrays of flags and the people in support and cheers.

This picture is first posted on Facebook in  the wee hours of nomination day at the haunting hour of 3:39AM. At time of writing the facebook post of the same picture has reached more than 4000 direct shares on facebook alone.

Very interesting thought. How about another omen...Aishah Ghani passed away just before nomination day. Omen for UMNO passing on?