WEF - MOST PROBLEMATIC FACTOR FOR MALAYSIA IS INEFFICIENT GOVERNMENT BUREAUCRACY AND CORRUPTION! 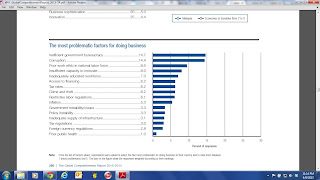 I see a lot of hype by the mainstream media about the ranking improvement by one notch to No. 24 for Malaysia in the World Economic Forum Competitive Report for 2013 - 2014.

Wait, there is a bit more, WEF also conducts a survey on the countries and the respondents are ask on the "Most Problematic Factor" for doing business in that country. And the result of the survey for Malaysia is:

Most Problematic Factor for Malaysia is INEFFICIENT GOVERNMENT BUREAUCRACY and CORRUPTION!

See pic here which is an extract of the Country Report by WEF.

There is also a ranking for other areas and Malaysia is Rank at 103rd for BUDGET DEFICIT which is at , at 4.3 percent of GDP in 2012, Ranked at 121st for low level of Female Participation in the Workforce and 51st for Low Technological Readiness.

Let's see whether the main stream media will report about this details of the report?