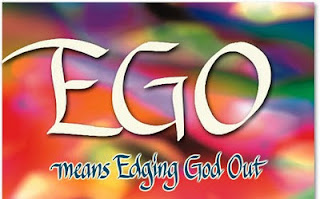 What a Bum!
Ego has always been the problem of mankind and somewhere it was written that EGO means to Edge God Out. What amaze me are those that call themselves man of god or visit the sacred places of worship on a ritualistic manner are sometimes the ones with the biggest Ego and recently this super Ego Malaysian has shown all his devilish traits in public either looking for attention or he thinks he is second only to God as in this Christmas greetings he wrote himself, this is what he wrote: “If thou be at peace, then God is wit thee, If there is some worry, WORRY NOT, Desi is wit Thee”.
Isn’t he putting himself second to God or even greater than God as shown in his trying to be poetic Christmas greetings which is full of super inflated Ego, he is telling you if you have worries don’t worry he is here to be your saviour! My God! He is just second to God as if God can’t help you Desi will and can! You can read the rest of his super Ego Christmas greeting which is an insult to this holy and sacred occasion HERE.
Who uses a name meaning to be of “Desire” sounding like the title for some porno movie and gets his angry, out of topic messages that promote hatred and flawed principles of righteousness that is regularly featured in an online internet news site thus degrading the site which otherwise in my opinion has quite an efficient reporting of the local political news.
He promotes flawed righteousness by questioning the right of those who does not agree to his views, he preaches democracy yet vile slander those that differ from his flimsy stand and narrow views. He questions the right to questions as in his writing published by the Malaysian Chronic “Who Art Thou” when some of us supported Nurul Izzah for the PKR election contest.
"Desire" asks “are these bloggers even card carrying members of the party?” And this clearly shows his narrow views of politics where others who are not members are not to question his party which is PKR as he declared that he is a card carrying member since 2005 and thus others who are not members have no right to question, Damn! Even umno dare not make such infantile statements like this, Look Mr.Desire, let me educate you for free and if you are a political party than you belong to the people of which you expound to serve and the people need not show you their membership card in order to question you idiotic whimsical politician who has shown not any elementary wisdom of being in politics.
How dare you question us the people of our principles in your distorted writings, how dare you who think yourself a politician goes about with your vile slander which only reflect the way you think as there is an old Chinese proverb that says “you view others as in how you would view yourself”.
Vile slanders of others in his recent writing title "Mercenaries Wanted - Reward a Huge Prize" and the article as carried by the Malaysian Chronic is lowest you can get from someone who claims to be a politician as in a card carrying member of PKR. With a member like this, PKR needs no enemies and you will always notice that PKR seems to have knack for getting such good quality members, Well Done! PKR for having another fine exemplary member in YL Chong and running such a inveterate media site.
His views are narrow as he thinks that others who express political views must only join his party than they are right and have the right to be political. His vile slanders of others are a cheap shot for fame and fortune, and we have heard enough of his bragging about being the Chairman of BUM of which he can continue to sit as chair fittingly for life because nobody wants it and that most of us don’t even attend any of his BUM events. Rightly and fittingly Desire is the chairman of BUM. What a Bum!
Posted by Unknown at 2:32 AM

Desiderata Chong is a Tian Chua balls carrier who can't write but becomes a regular shit at the MC.
MC is a factional spin doctor for Tian Chua - Azmin Ali faction within PKR.

I stopped reading his writings a long time ago after meeting him in person. Somehow short people tend to be short people. There are exceptions of course.

He is a piece of shit and everyone knows that and if you don't know him in person than his bad writings will reflect this shithole.

No quality whatsoever is shown in the editorial of this news site.

Jack,
This vile bastard has been relentlessly on the attack on RPK, Haris and the MCLM. His arrogance and big f***ing Ego in accusing these good people is cruel and hitting below the belt.
He deserve no mercy and a curse to the opposition pact of PR. With idiots such as YL Chong in PKR we need no enemies and he could be the real Trojan paid to disrupt the peace with civil society and PR.

Malaysians have to wise up, grow up and be matured to understand the whole political scenario of this country. Many are so easily influence by those who have ulterior motives and not be able to differentiate between white and black.

There's nothing friendly about this vile-killing of Haris and RPK.

At the rate this shooting down of their 'own' people is going on, the most likely outcome is BN will win hands down in the coming GE13 !

And of course Anwar will get to cool his heels in Sungei Buloh for a longish stretch, may be 7 to 8 years at a minimum.

And all will quieten down with the curbs on the internet and BN will rule for at least 20 more years or until the country run out of money.

Yo PKR, please continue with your friendly fire and don't forget to load up for your biggest round in East Malaysia. Way to go, man.

Anyway, did not some cina fengshui guy predicted Anwar will NEVER be PM, he's just not fated to be, heheh. ( sorri,just can't resist the last flippant note, lol)

everyone s a bit too carried away by the "trojan horse" calling donchathink?!

hi haweye, i am just a neutral observer, will just leave it to u to believe me. if read within context, it looks as though desi's "if there is some worry, worry not, desi is with thee" was mean sound lighthearted, rather than d egocentric version as made up to be...

my 2 cents worth - this is just 2 pro-reformist men going overboard against each other following some relatively benign "tail-stepping"...

commentators, pls save your typing resources for cristicism on our REAL COMMON ENEMY-BeEnd's graver wrongdoings...?! we aint got much time to GE13!!!

so pls, cut the adding oil to fire slanders from both (again, relatively) benign ends and just fucking FOCUS on d real devils out there!

The most used, overused, misused and abused word in PKR: Trojan.

You are either with them or a trojan.

He who is not with us is a trojan.