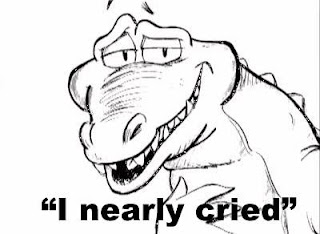 "Crocodile Tears: A false or insincere display of emotion such as a hypocrite crying fake tears of grief. The expression comes from an ancient anecdote that crocodiles weep in order to lure their prey, or that they cry for the victims they are eating."
This Member of Parliament of Raub (Pahang), Tourism Minister Datuk Seri Dr Ng Yen Yen has spent some RM3.25 million on overseas trips which comprises of RM1.67 million for the whole of 2009 while for the first 10 months this year, the bill came to RM1.58 million.
The tourism minister has made 16 visits overseas since being appointed. These visits include 26 countries, and 61 cities up to October 2010.
This is the quality of the Malaysian Ministers that we have as she had thought that as a Tourism Minister her function is to be travelling the world as a first class tourist.
Expressing concern over the minister's exorbitant travel expenses locally and abroad, the PKR MP Tian Chua tabled a motion today to cut her salary by RM100.
Responding to the pay-cut motion moved against her by opposition MPs today she told reporters that she "nearly cried" from all the accusation against her.
Anthony Loke (DAP-Rasah) who had earlier last month criticised the her Ministry for the grammatical errors found in the brochures for the 2010 Shanghai World Expo for the Malaysian Pavilion.
He said “The purpose of the expo is to showcase what the country can contribute to the world’s economy.
Sadly there is nothing in the Malaysian pavilion that shows such a thing. The various spelling errors in the Malaysia pavilion brochure, where the word “development” is spelled as “decelopment” and “visitors” was wrongly spelled as “visitious”.
Look at this sentence — To know more about Malaysia, we ‘incite’ you to step into the Malaysia Pavilion. What kind of standard is this? Don’t tell me that no single Tourism Ministry official proof read this before printing the brochures?
This is highly embarrassing, to say the least. Beautiful is even spelled as ‘beautuful’. A shame, really,”
Loke further rapped Ng on the Malaysia Pavilion at the Shanghai World Expo. Loke said the expo was just another fair promoting tourism, not an in-depth venture promoting Malaysian culture.
"The artist hired to sing was from Taiwan, while an actor promoting a local product was from Hong Kong.
"Why not have local singers or actors promote Malaysia there? Locally, they hardly get the opportunity to showcase their talents," he said.
Read Full Report HERE
Posted by Unknown at 9:29 AM

I think she got the title wrong. She thinks she is a Tourist Minister and not a Tourism Minister. This is Malaysia Boleh???.

Very sad . Still no correction on the parliamentary seat. MP OF PANDAN IS NOT NG YEN YEN

Thank you for pointing out the error and it now stand duly corrected.

Ng Yen Yen is the Member of Parliament for the Raub Constituency of the state of Pahang.