Playing the Part of the Loose Canon 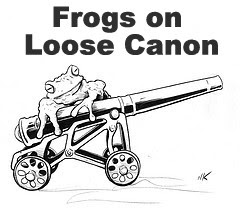 See if you can find any similarity to the Malaysian local politics of wily politicians leveraging on fear and uncertainty, some playing the part of the loose canon in trying to get attention and making headline news. In being strategic one must learn to see the reason of being so and why they say what they say, why they do what they do and in revealing the underlying motive, sieving out pretense from truth.
An extract of a report about the tension in the Korean peninsular between North and South which i found interesting considering that this year is the 60th anniversary of the Korean War and that 60 years is a complete cycle in the study of cycles like the Kress 60 year cycle, the 60 year climate/temperature cycle and the chinese 60 year cosmological cycle and etc. And not forgetting that September 11 attack in New York, USA is a 60 year cycle from the attack of Pearl Harbour in 1941 of World War 2.
Lets look at the tactical viewpoint in the Korean peninsula as in this just published report from Forbes as below:
North Koreans have proven to be wily tacticians, able to amplify their power by acting psychotic. The regime's actions follow a long-used playbook of leveraging fear and uncertainty to gain power--and they indicate that North Korea's leaders are anything but nuts. For instance, the North's sinking of the South's warship the Cheonan earlier this year served to heighten anxieties in the South, just as did its issuance of threats immediately after former South Korean president Roh Moo-hyun committed suicide last year. Since Seoul, one of the world's densest cities, is within North Korean artillery range, at only 31 miles from the border, the South is scared to react with military power.
North Korea stunned the world earlier this month by having Stanford professor and former director of the Los Alamos Laboratory Siegfried Hecker confirm that it has far more sophisticated uranium enrichment capability than previously thought. After this unsettling disclosure, North Korea sought to leverage the fear it created by attacking soon afterward. Such incidents follow one another like clockwork, and even the effect on stock markets is the same each time. The market dips 2% to 3%, and then everyone calms down and it recovers. If investors bought stocks like Hyundai or Samsung every time North Korea acted up, they'd make a pretty good return.
What is surprising is not North Korea's actions but that the West and South Korea were so ill-prepared and don't seem to understand the logic behind the North's attacks. The attacks are not the actions of an insane regime. They are coolly calculated measures to gain power. If North Korea didn't attack and appear crazy, no one would care about it, and it would become forgotten, similar to smaller countries like Laos. Instead Kim Jong Il plays the part of the loose cannon and thereby gains attention and clout for his country, pressures China to give more aid, and even gets visits from former American presidents like Bill Clinton and Jimmy Carter, all of which makes him appear more powerful to North Korean citizens.
Forbes report HERE
Posted by Unknown at 11:56 PM