Say NO to Governmental Sabotage! 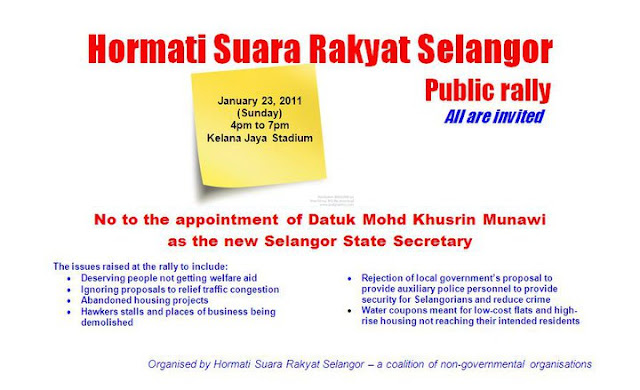 Civil Society groups and Selangorians have come together to form a Rakyat initiated effort called Hormati Suara Rakyat Selangor (HSRS) to show their disappointment and anger over the appointment of Datuk Mohd Khusrin Munawi as the new Selangor state secretary.
The group, formed on January 11, 2011, will hold a public rally soon to pressure the the Chief Secretary to the Barisan Nasional federal government, Tan Sri Mohd Sidek Haji Hassan, to declare Khusrin’s appointment null and void. At least 10,000 people to participate in this public rally.
The Hormati Suara Rakyat Selangor Public Rally details are as follows:
Date: January 23, 2011 (Sunday)
Time: 4pm to 7pm
Venue: Kelana Jaya Stadium
Khusrin’s appointment is a culmination of the relentless attempts by the BN federal government to frustrate the Selangor Administration in carrying out their policies and programmes.
The fact is Selangor Menteri Besar Tan Sri Khalid Ibrahim did not receive the recommended list from the Public Services Department. Since this have been revealed, it is only imperative Sidek declare the appointment of Khusrin as null and void, as due process and convention was not followed.
The Rakyat in Selangor deserves the right to expect their elected Pakatan Selangor State Government to provide the best services. By denying the MB the choice of the Top Civil Servant, the Rakyat in Selangor are also denied their rights.
HSRS’s maiden effort in organising this rally is to get the Rakyat to come together to voice their dissatisfaction on the current state of affairs and to show the many instances where the Pakatan Selangor Government policy implementation has been sabotaged by civil servants still loyal to their previous political masters.
At the rally, we will highlight the many instances where local issues for residents could not be resolved due the non-cooperation of the BN federal agencies such as Public Works Department (JKR), police, SYABAS, Social Welfare Department (Jabatan Kebajikan Masyarat) and the Housing and Local Government Ministry.
Further Details HERE
Posted by Unknown at 12:11 AM