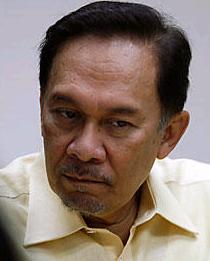 In a comment to the correspondent of wfol.tv who wrote in a local blog that the PAS should join the Barisan National (BN) instead of having one foot in opposition and the heart in the government, Anwar Ibrahim the Malaysian Opposition leader said the Umno was under pressure to have PAS on its side. Harakahdaily.net reported the Twitter comment by Anwar Ibrahim to our correspondent in an article today on their web portal in English.

Harakahdaily said the opposition Leader Anwar Ibrahim (right) said UMNO was now being forced to seek cooperation with PAS due to desperation.

He was responding to an online comment suggesting that PAS should join the Barisan Nasional coalition, following PAS Murshidul Am Tuan Guru Nik Abdul Aziz Nik Mat’s confirmation of reports that he had been instructed to be present at a palace dinner hosted by the Yang DiPertuan Agong on December 24 together with UMNO president Najib Razak, wrote Harakah.

“When UMNO finds itself stuck, they ask PAS for cooperation. Stop corruption, oppression and tyranny first,” said Anwar in a Twitter posting to Peacemission66 on Twitter. Peacemission66 is the twitter ID used by correspondent in Riau, Indonesia.
Posted by Unknown at 5:07 PM