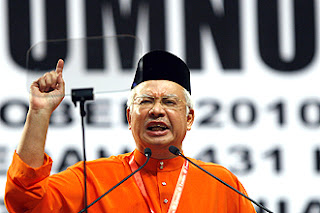 In a speech that is bound to raise the already high political-temperature in the country and drive investors further away, Prime Minister Najib Razak used violent language in his opening address to his Umno party, vowing to defend their five-decade stranglehold on the federal government even if it meant crushed bodies and lost lives.

“This is the most shocking and irresponsible statement to come from a PM although many of us in the opposition have been warning of a major showdown. But it also brings to the fore the fact that Najib is not as confident as he pretends to be. In fact, he is desperate because the chances are very high that Umno-BN will lose,” PAS central committee member Nizar Jamaluddin told Malaysia Chronicle.

At the 61st Umno annual assembly, Najib – who is the party president – was cheered by members as he led them through reverberating shouts of Hidup Umno (the Malay equivalent of Long Live Umno) three times. Umno pundits had actually been expecting a slightly cooler reaction with many members waiting to grill Najib for his 1Malaysia plan, tepid performance and recent flip-flops on a series of political and economic issues.

“Even if our bodies are crushed and our lives lost, brothers and sisters, whatever happens, we must defend Putrajaya,” Malaysiakin reported Najib as saying. Putrajaya is Malaysia's administrative capital.

Racial cleansing
In his hour-long speech, Najib even warned of the possibility of 'racial cleansing' such as in Rwanda and Bosnia if unnamed parties continued to challenge and debate the preferential status now enjoyed by the Malays.

What a violent and malicious PM.

sounds like a drowning man clutching to his last straw ... we all are very scad lah ... make sure we get rid of u once & for all ... if not election in election out you repeat the same stupid threat or we all are forced to go thru sodomy 3, sodomy 4 ...