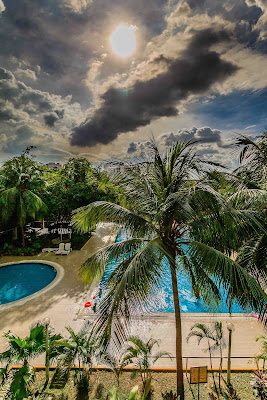 Picture of the Winter Solstice Sun Today about 5 PM
I have written about the Autumn equinox or the mid – autumn festival here in this blog sometime back and since I am on a kind of short break from a very busy year of 2012, as the year comes to a close and especially on this significant date of 21 December 2012 which has seen much hype from movies, documentaries and hundreds of books and articles written on this special date.

The purported end days of the Mayan calendar and others have seen much speculation of doomsday apocalypse or other catastrophe which has made this date significant. The year 2012 is a unique leap year with three Friday the 13th that is exactly 13 weeks apart falling on the month of January, April and July.

Those who are in to Astronomical, Astrological, Astral, Metaphysics, Celestial and Spiritual research and studies will be able to share their stories and theories about the significance of the year 2012 which reminds me of my friend Antares from Magick River, he should be able to share endless stories from a higher spiritual plane if you bother to ask. (must find some time to visit that magical river).

This day of 21- 12 -12 or 12 – 21 -12 whichever way you want, happens to fall on the Winter solstice of the year, whilst the Autumn equinox is about equilibrium and balance, the Winter solstice is about climax and turning points made significant in a very special year.

The Solstices is an astronomical event as well as a major festival celebrated by the Chinese and other ancient civilisation, it is a time where the Sun is at its weakest and farthest from the earth giving us the shortest day and longest night especially so to the northern hemisphere. Wiki here.

These festivals has been celebrated in the middle kingdom for thousands of years and has been traced back to the time of the Zhou dynasty some 3000 years ago and many believed that the festival could have started even much earlier as far back as the time of the mythical emperors of more than 5000 years back when agriculture and farming was the mainstay.

Many do not understand the Chinese calendar which is read in combination of the solar and the lunar calendar and the dates for the mid-autumn festival which is celebrated on or about the Autumn equinox falls on the 15 th day of the eight lunar month are derived from the lunar calendar and the date of the “dong zhi” or winter solstice from the solar or “xia” calendar which falls on the 21 or 22 of December.

The dong zhi festival is similar to the western Thanksgiving day and in ancient time a celebration for a bountiful harvest before taking a winter break and to begin again after the Spring festival which is the Lunar Chinese new year. It is the end of an agricultural cycle which starts during the spring festival and today celebrated as the Chinese new year.

Traditionally this day of dong zhi is celebrated by the offering of thanks to the heavens and the ancestors, a time where the family gather to feast and are breaking off for the holidays before the main celebration of the New Year. It is a festival of thanks and reunion where communities gather in celebration of the renewal of kinship and of association, it is a time of unison resulting in a resolve to start the next cycle with greater gusto of passion to see success.

One of the traditions during this festival is the eating of the “Tang Yuan” (Soup Ball) a glutinous ball or dumpling made of flour which comes in a variety of colours and stuffing cooked in a sweet broth and served as a dessert which signifies positive renewal and rebirth.

From the “I Ching” and the Chinese almanac this a cyclical interpose between Light and Darkness where the battle reaches a turning point when light began to overcome darkness, the time of truth over lies and deceit, it is the expose when everything becomes plain, it is the time of the positive cosmic energy of “Yang” over “Yin”.

I hope this writing will contribute to your celebration of the Winter Solstice for the year of 2012 and brings about a reflection of the darkness now facing our nation where gross impropriety is plainly seen and in all sectors of our communities from financial management to toxic contamination of our environment, if left uncheck it will be detrimental to the next generation and this generation will suffer unless we unite to put a stop and save our nation.

Happy Winter Solstice and wish you will return with a greater resolve to put a stop to the darkness enshrouding our beloved country. Save Malaysia.

Article on chinese culture HERE
Posted by Unknown at 8:26 PM

It's always a great pleasure to be in your wise and worldly presence, my dear friend Hawkeye!

Circumpolar Rainbow Blessings upon you and your great lineage, plus massive good fortune, joy, boundless health and fulfillment.

Thanks for another instructive blogpost!