The Mid Autumn Festival - The Equinox 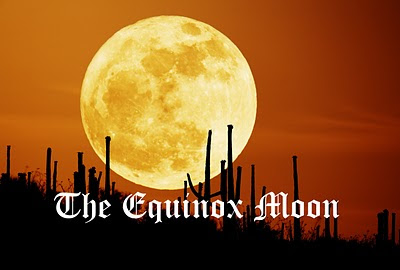 The Mid-Autumn Festival is celebrated on the 15th day of the eight lunar month of the chinese calendar which this year falls on the 22 September 2010 today. The 15th day of the lunar month is a time when the moon is at its fullest and coincides with the autumn equinox of the solar calendar. The fullest and brightest moon is expected at about 3.10 am after midnight the 23 Sept 2009 thats when it will be at its equinox. 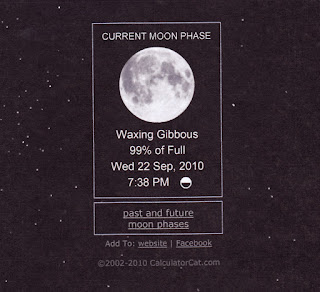 An equinox is a time when the earth's axis is equal or center and that is when the time of the night and day are at an equal length of time. There are two equinox and two solstices in a year, the first one is the spring equinox that occurred in 20th March.
Historically the mid-autumn festival has been traced back to the time of the Zhou dynasty some 3000 years ago and many believed that the festival could have started even much earlier as far back as the time of the mythical emperors of more than 5000 years back when agriculture and farming was the mainstay.
Traditionally the mid autumn is the completion of the summer harvest, its a celebration of a bountiful harvest and a time of holiday making after the hard work all through the year from spring to summer. The date of 15th day of the eight month was a date that were fixed thousand of years ago that coincides with the autumn equinox as the ancients of old were great scientist and had studied the heavens and were long aware of the workings of the universe and were already able to calculate all the precise timing as evident from the chinese solstice and equinox celebration.
The mid-autumn festival has evolved through thousands of years which started as a harvest festival that falls on the equinox when the moon is to be the roundest and the fullest time and thus the celebration was synonymous with moon worship which is actually an act of respect and admiration of the way of nature, of the sun and the moon and of the universe. The ancients had back than in all their deeds tried to emulate the way of nature and to be working with nature and not against it. Maybe this 2000 years old proverb will help;
"Nature is complete because it does not serve itself,
the sage places himself after and finds himself before,
ignores his desires and find himself content.
He is complete because he does not serve himself." 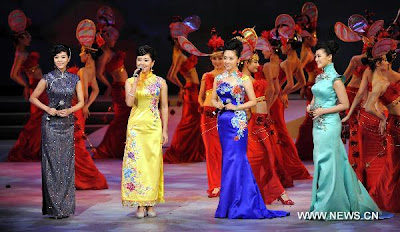 (An evening gala celebrating the Mid-Autumn in Hong Kong on 19 Sept 2010)﻿
And so today the festival is also a celebration of nature as represented by the beautiful autumn moon, at a time of its brightest and fullest, a time of beauty of all of mankind and of nature. The mid-autumn festival is probably one of the oldest festival and is today a major celebrations after the chinese lunar new year and is a public holiday in china, taiwan,vietnam and south korea. It is a weeklong celebration leading to the actual day. 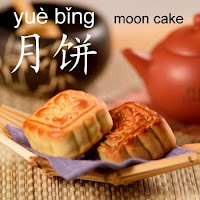 This festival is also a representation of revolution as it was said that during the Yuan dynasty (Kublai Khan), the people of china had rebelled against the declining mongol rule and had used the mooncake to transmit messages of dissension and rebellion that lead to the overthrow of the Yuan dynasty and in the new Ming dynasty in 1368 AD. So the mooncake was probably the early SMS (short message service) of the old days carrying messages of dissension. Ever since than in the Ming dynasty the Mooncake has taken a central theme in the festival.
The mid-autumn festival being one of the oldest festival continuously celebrated has through thousands of years pick up mythical stories of romance and fairy tales and was greatly celebrated during the Tang dynasty of 618 to 907 AD which was regarded as an era of prosperity and the flourish of civilisation in china and the golden age of chinese history from the Tang era the mid-autumn began to take on a romantic atmosphere with lanterns and fireworks and other events like dragon and lion dance in an atmosphere of great romantic celebrations. 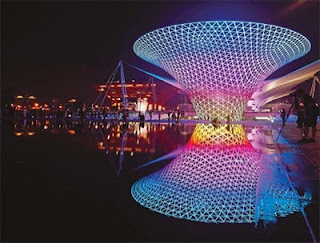 ﻿(Mid Autumn Festival at the Shanghai Expo 2010)
Have a Happy and Romantic Mid-Autumn Festival!
You can read more of other mid-autumn folklore and stories in wikipedia HERE
Posted by Unknown at 10:48 PM

Email ThisBlogThis!Share to TwitterShare to FacebookShare to Pinterest
Labels: Culture, Others

Interesting.. to know the festival has so rich a history dating back to 3000 years and maybe more.
Was always told the story of the goddess who was banish to the moon.

Happy and Merry Mid Autumn festival for you and your loved ones.

Some quotes on the significance of moon and romanticism in Mid Autumn festival I'd like to share here: -

Buddha once said, "There are 3 things cannot be hidden long: the sun, the moon and the truth".

I think, these quotes alone, make this festival a meaningful one.

Wish you a great day ahead Sir.

wishing you and your beloved family a merry and meaningful Mid Autumn Festival.

Here's 2 quotes that make me see this festival a meaningful celebration.

Buddha once saaid, "There are 3 things [that] cannot be hidden long: the sun, the moon and the truth".

And a Happy Mid-Autumn to you.

You are showing a lot of wisdom for being able to relate with the quotes of Buddha and Yost.

The Truth cannot be hidden for long and will soon surfaced and our politicians should take heed of this wisdom.

Exactly what a friend inuired as when the word "Romantic" is used they immediately associate romance with a sexual mindset.

Romance is not restricted to a sexual encounter. It includes an atmosphere of excitement,fascination and heroic deeds of bravery and even thoughts.

We could now be experiencing a romantic era, a romantic era of fear and excitement and exaggeration in the quest for a new social order based on truth and in the course there will be much heroism and bravery.

And history will record such events and uprising of chivalry of gallant warriors of honourable men and women.

For the love of country and people!

The mooncake festival and my grandad relate the story of the old man in the moon chopping firewood. lol. now only i know the real story. thx you mr.hawkeye