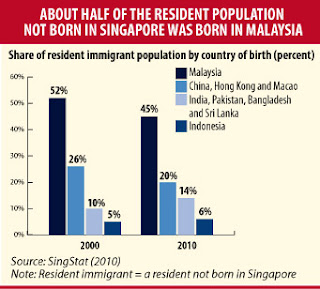 By Jennifer PakBBC News, Kuala Lumpur
Willson Lee is a proud Malaysian, but he left the country five years ago.
The Japanese grill in Hong Kong's crowded district of Causeway Bay is just one of a handful of restaurants he now runs in China.
Over plates of marbled beef, Mr Lee explained that he used to have businesses in Malaysia ranging from gold mining to stem cell banking.
But he left in 2008 because, he said, a policy favouring the Malay-majority over ethnic minorities was "blatantly abused" to enrich those in power.
The policy, he said, meant that his companies had fewer opportunities, something that hurt profits and left him and his partners demoralised.
Mr Lee is part of what the World Bank calls an "intense" brain drain problem that could hurt Malaysia's ambition to become a high-income economy by 2020.
Most of those who leave are ethnic Chinese, like Mr Lee, or Indian. They make up a third of Malaysia's population of 29 million people. 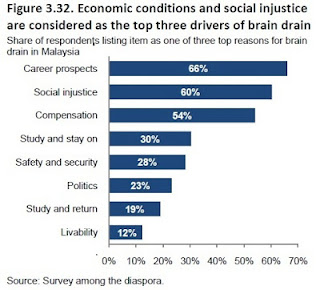 Many are propelled from the country by long-standing policies that give preferential treatment to ethnic Malays in areas from housing and education to government projects.
The objective is to re-distribute 30% of the country's wealth into the hands of Malays and indigenous groups, collectively known as the Bumiputras, because they lag behind the ethnic Chinese.
Although a certain percentage of listed companies has to be owned by Bumiputras, Mr Lee says this quota is applied to private businesses as well.
The government would often give licenses to a Malay company and he would have to partner with them in order to do business, he said.
"That is standard practice throughout Malaysia," he said.
'Chinese tsunami' 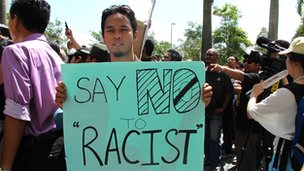 Many voters are put off by the government's policies that favour ethnic Malays
Prime Minister Najib Razak wants to attract this talent back, but it will be tricky. In polls on 5 May, the disaffected Malaysian Chinese community largely abandoned his Barisan Nasional coalition.
Mr Najib still secured a simple majority despite winning only 47% of the popular vote.
That's because constituency sizes give greater weight to rural Malay voters, who are the core supporters of the governing coalition.
There were also allegations of electoral fraud, which the governing coalition has denied.
Mr Najib's former political secretary and senior visiting fellow with Singapore's Nanyang Technological University, Oh Ei Sun, says the results are disappointing to the Malaysian talent overseas, who are believed to be mostly opposition supporters.
Some flew to Malaysia just to cast their ballots but when the opposition won 50% of the popular vote and still didn't form the government, many went back feeling hopeless, Mr Oh said.
He believes many more professionals may leave the country.
Read the Full Report from BBC HERE
Posted by Unknown at 11:21 PM