Had lunch with some Aunties and Uncles business people and as I arrived late and there was an intense conversation already going on and all in canton. Took my seat and a drink of the aromatic Chinese tea while trying to make out their dialogue and thought their discussion was on a friend of theirs as the name Ah Wah Ko was continuously mentioned. Until I heard the date of 916 (Sept 16) and went on to inquire what has Ah Wah Ko got to do with 916 and one of the aunty ask that am I not a friend (actually meaning supporter) of Ah Wah Ko?

Had a late night the previous night and was not quite alert in the head and looking a bit dumbo until another aunty exclaimed “Ah War Ko is Anwar lah! Hai Yah”. 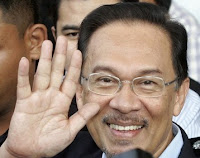 Well looks like Anwar has quite a following on his “reformasi” cause and when these guys starts giving you names like this Ah War Ko (Big Brother Anwar) giving it a sense of intimacy and respect and you know they are and will be with you.

And their topic is on the sodomy case hearing today as they are all eager to find out the outcome and as well as the 916 event and the possibility of change that they hope could materialize.

Well Cheers to Ah War Ko and Yat Lo Soon Foong! (Smooth Sailing All The Way to 916)
Posted by Unknown at 6:57 PM