Why the Frogs Jumps 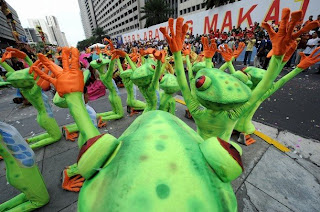 Why the Frogs Jumps

Frogs also referred to as Salientia which is Latin for “to jump” and populates all corners of the earth and are sensitive to their environment in which it lives and act as an indicator towards the health of their environ as the saying goes “as goes the frog so goes the swamp”.

Frogs and Toads are different and are sometimes mistaken to be the same; Toads often have leathery and dry skin and found mostly in dry areas unlike the frog which have a thin layer of skin and is moist and is more aquatic or semi aquatic. In fact the toad doesn’t jump about too much and they also burrow into the ground.

As the frogs are sensitive to their environment and have a high level of instinct and they will jump when they sense that there is a threat and negative development in their environment for fear and in an attempt to protect and safeguard their species.

There is no distinction of morality or ethics as the frog jumps as it is a natural and just action all due to fear of the environment being destroyed so their actions are fully justified and a just action of courage as they will need to cross streams, rivers and ‘lonkangs” as well to reach a safer haven. It is a justified action as their environments were being contaminated and might be destroyed by the polluters.

Unlike the toads with their thick and leathery skins might just burrow into the ground and thought that all will be alright (like the ostrich).
Posted by Unknown at 5:54 PM

Yeah The frogs are on the streets and jumping with joy as they reach a new Environment.

Hawkeye,
The frogs jumps bcoz they are frightened off by the mamaks.