Guardian of the Evil - ISA 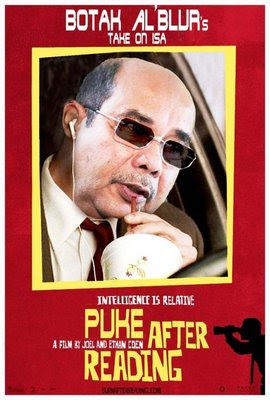 (Pic by Bodohland)
The guardian of the evil ISA speaks out in defense of its use in the Sunday Times of Malaysia and what a load of crap as he speaks against the wishes of millions of Malaysians who is against the use of the ISA and are calling for its total repeal as in the unanimous motion of the bar council and all of civil society.
And we all know that it is the home minister who evoke the unjust act against innocent Malaysians just because they speak out against the ruling government and that they use the act to impose Fear on the rakyat and a means of silencing dissenters.
Syed Hamid said that;

This involves hatred, which covers religious, racial and cultural issues. Secondly, actions that can affect the national economy such as by crippling the country's economy and scaring away investors due to uncertainties."
How can the actions and behaviour of anyone pose a threat to national security? Is he trying to say that just by speaking out and writing than there will be chaos? Come on Syed Hamid, do you think that Malaysians are stupid? Even in primary school we are encourage to express our opinions and to speak out, do you mean to say that your children do not speak out or they are 100% obedient to your wishes like robots?

Do you mean to say that the reporter from Sin Chew can cause conflict and riot? or Teresa Kok can cause public disorder or Raja Petra who have been writing for years and all this while there is peace and no riots and suddenly just because you say so than there is public disorder.

And what has Sheih of Kickdefella done to merit detention for 3 days, and what is so seditious about him when all he feels is that you guys of the government is not doing a good job of managing the nation and so because of your failures he signal for distress meaning that you need help in running the nation. And for that you lock him up in detention with the use of another outdated, unjust and draconian law.

The only people that is talking about racism are those from your party umno who has incessantly one after another trying to incite racial hatred but sorry to say Malaysians today will not fall for that cheapo tricks of yours and your kind. And the best part is that these people who incite racism are walking freely and you jailed the innocent without justification.

To another question from the reporter as follows;

Q: Is the government ignoring the views of those who oppose the ISA?

A: There are two responses to the ISA. Do not think that those who oppose the ISA are the majority.

I think those who support the ISA do that not because of race, culture or religion but because they fear there would be violence and clashes in the country.

How is it that there is no threat if international parties have classified Malaysia as being politically unstable?

There is instability and advice is given not to invest in the country. Isn't that a threat to security?

So, police must have had grounds before they acted and used the ISA. Some say the ISA is outdated but this act has developed and its procedures have kept up with current times.

Mr home minister, please show us who supports the ISA as we have not met anyone who support this Law of Evil. Please for the sake of God and justice, lets have a public forum or debate on the use of the ISA to once and for all clear the air and proof to the nation that you are not talking shit.

And again please dont talk rubbish, if International parties have classified Malaysia as politically unstable it is because you and especially you and the government of yours is unable to run the nation efficiently and cant manage the country so please go retire back to where you came from and let others manage this beloved country of ours and not ruin our beloved nation by your gibberish talk.

I dont understand how has the ISA developed and its procedures kept up with current times? Do you mean to say that the ISA has developed that now it is used against its own people? And what procedures??? Do you mean procedures like just locking you up without proper proof and justification or do you mean the procedure like keeping you in detention and the incessant interogation to deprive you of sleep and rest or feeding you with dog food????
The Muslims Professional Forum has said that "The use of the ISA is excessive, inhumane and runs counter to islam's principle of justice".

Petubuhan Jemaah Islah Malaysia (JIM) has called "The act of throwing accusations without any proof is "HARAM" from the point of Islamic Law".

Syed Hamid, for the last time, please shut your loose gap and dont think that Malaysians are STUPID like YOU!

THE ISA MUST GO!!!! AND THAT IS WHAT ALL MALAYSIANS WANT!

FOR THE SAKE OF JUSTICE FREE ALL ISA DETAINEEES NOW!

Make one wonders how he could qualify to be one of our Minister, right ?
Or could there be other reasons behind the scene, eg he is the point man to create public frustration against BN, hence Pak Lah Administration ?! ulterior motive, conspiracy theory ?

Anyone one care to shed some light.

You could be right anon, as this is Najib's man.

Hey hawkeye, Kelly here, met you at wharf in case you don't remember.

After RPK's sending away to Kamunting today, me and Shar101 have decided to hang the flag upside down in my blog to show protest against this evil act.