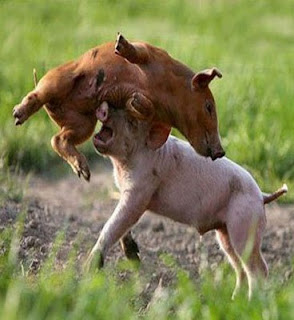 Pigs are intelligent animals and one of the earliest animals domesticated by man. Generally pigs don’t fight much and take fighting as a game or in play, they just loved to get dirty in the mud.
The negative aspect of a pig is overindulgence and in such a circumstance greed than set in, which could cause them to be very manipulative and cunning.
Never fight with a pig.
You can’t win.
You both get dirty.
And the Pig loves it.
-Pasquale Capozzi-
The primary issue face by Malaysians everyday is an environment of highly political maneuvering for leadership in party politics and of national politics, all in the power game that they play at the expense of the people.
We are constantly being bombarded by controlled propaganda and spinning by the national media and that is not enough as than professionals are brought into the fray and millions of the people’s money is being wasted by paying consultants to concoct and devise further propagandist strategy without consideration for the livelihood of the majority of suffering low wage earners who had not the time and comfort for all the garbage being broadcasted.
Every morning you will hear the Music of Unity but see and read the Politics of Division, you can hear the distant roll of drums but are they Drums of War or Drums of the Forgotten Kings. They care not for all that is unjust and will not to right the wrong for all that they want is the stash for their battle chest.
Look at this fight between the Dirty Leg and the Cow acting out a theatrical act of a “Pig Fight” with the design of garnering support from their party and people in a move to first divide and create conflict and that they become champion of their tribes. Their tactics are to project an image of being courageous in speaking up for their different communities and cares not of further dividing and driving an irreparable wedge in between.
These two pigs are actually the best of friends and got together in devising this crude and cruel politically tactical move or are they pawns in the greater scheme from their master.
Yes, they are good old friends and share many similar traits and times. Both of them are born in 1947, the year of the Fire Pig (too much fire - could end up as roast pig). They came from the same state one in Muar and the other in Batu Pahat which is just 15 minutes apart.
They both went to the same University at the same time, one did psychology and the other in economics and tribal studies. After university they went back to work in the same district and one became a medical officer and the other an assistant district officer.
They later became local party leaders in neighboring branches just next to each other. The leg first served in the cow’s state cabinet in 1986 the same time when cow first became Chieftain of the local tribe.
And now they talk of beating war drums and racial wars, it’s all a scheme to frighten the communities and they broadcast in their respective propagandist communal media and they spin like crazy till your head gets dizzy.
Numerous events are planned and timed to intermittently and incessantly build up the momentum of emotions of fear, fright, disgust and a sense of being deprived or cheated by the other communities.
Prominent business leaders are roped in to magnify the Pig Fight which is the politics of divisive conflict and yet other innocent social leaders unconsciously fall prey and are drag into the mud. Suddenly you see much publicized events like Economic Congress and discussion of economic distribution and talk of deprivation and fair share. The speeches by the business leaders are prepared well in advance and approval sought as the Crony Businessman will never ever touch on topics of political sensitivities without being instructed by the political master.
So what’s all this hoolabooloo about? The leg become champion of the pigs and the cow champions of the cows? Oh, actually the cow is a pig but goes around moo mooing and thinks that he is actually a cow when they are both really pigs but the pig will tell you that he is actually a dog and mistaken for a pig if you were to ask him.
Posted by Unknown at 1:50 AM

Thanks Hawkeye, this just confirm my suspicion. All a big Sandiwara!

Thanks Hawkeye, this just confirm my suspicion. All a Big Sandiwara!

Yes Hawkeye, A big sendiwara advised on by APCO. You should have been paid the fees instead of APCO. All I can say is bollocks to these actors in a sendiwara.

"Always remember, a cat looks down on man, a dog looks up to man, but a pig will look man right in the eye and see his equal." ~ Winston Churchill

At the height of the swine fever blamed on pigs, two pigs were wallowing in their pen. One asked the other, "What is all this about about us swine causing this fever?" "Beats me....must be BTN propaganda...doesn't worry me because I am a frog."

I like this style of writing as it is unusual and requires a thinking mind and is refreshing.

This stimulates your sub conciousness and gives you the pleasure of an awakening extending the spectrum of mind to the total context.

Hawkeye, your thoughts and writings addds an interesting angle to the MT readers. Well done. Keep it going.

The Johor pigs are mere pawns of the old swine from Kerala.
The old swine instigated the fight hoping his bald boar offspring can emerge champion of the mud.

Muhyiddin does not speak for the malays and Soi Lek do not represent the chinese. They are trying to incite racial sentiments and the rakyat is not fooled by their antics. Come GE 13 the rakyat will boot them out.

Those of us who don't care a fig for the pig and who will never bow before a cow have no option now but we must get ready to take over the whole frigging farm. Thanks for a very funny and insightful post, Hawkeye!

Top website, I hadn't come across hawkeyejack.blogspot.com previously in my searches!
Keep up the fantastic work!