The Black Dragon in Malaysia 2012 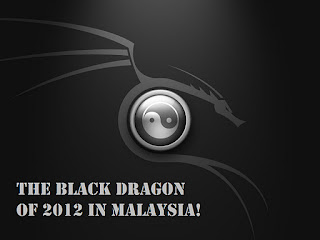 The year 2012 has seen much deliberation way before it approaches from the end of the world supposition of the Mayan calendar that is reproduced in TV documentaries and even a movie is made of the same title “2012”.

The Dragon is the only animal in the Chinese astrological chart that rules the skies of the 12 animals and is a representation of the imperial family and in the dynastic history the dragon symbol can only be used by the emperor.

The magnificent dragon has an enchanting quality all throughout the history of China that is significant of high energy, heroics and a revelation of the fate and destiny.

The Water element bears the quality of Intelligence and Wisdom, the Yang principle of the Water element signifies high energy, volatility and constant unstoppable movement. Water also represents the masses, the people.

And thus in this combination of Water and the Dragon brings us the Black Dragon of 2012.

In order for us to relate Malaysia to the Black Dragon we first need to know the astrological make up of the nation.

The Federation of Malaya obtain its independence on the 31 August 1957 which is a Fire Rooster year, however on 16 September 1963 a new nation Malaysia was established in a Water Rabbit year.

This can be simply translated that the founding of Malaysia is not in harmony with the earlier independence of the federation of Malaya, and the new nation is destined for problem and conflict from the day it started bringing sufferings and calamity to its people.

The Federation consist of 9 Sultanate States and the 2 British Straits Settlements of Penang and Malacca which gains its independence from the British on 31 August 1957. In 1963 Malaysia was formed together with the States of Sabah, Sarawak and Singapore.

Later on the 9 August 1965 Singapore broke away and became an Independent nation and how lucky can that be for this little island which has today progressed by leaps and bounce to be listed as an advance nation and a high income economy leaving Malaysia far behind a backward Nation of high corruption and a low income economy.

The last time Malaysia had a General Election in a dragon year was the first election of the newly formed nation of Malaysia on the 25 April 1964, the year of the Wood Dragon, which was won by the then Alliance Party. It was also the first time the (PAP) The People’s Action Party of Singapore participated in the election and won only one seat and that is the Parliament seat of Bangsar constituency which was represented by Mr Devan Nair who later became the 3rd President of Singapore.

Will this Dragon year see a new beginning for the Nation like the new beginning of 1964, the first general election for the new nation of Malaysia?

Coincidentally the Black Dragon rules the sector or direction of South – East, exactly the location of Malaysia. The signs points to high activity in this sector where the Dragon rules and has a possibility of seeing a real Tsunami as compared to the one in 2008 which will be miniscule in proportion. The election of 2008 was in the year of the Earth Rat who is a buddy of the Dragon and is just helping out the Dragon in passing.

Again, coincidentally the new umno was founded in the Dragon year of 1988, the Dragon is a majestic symbol and when two dragons meet there is a conflict. (For those born in the year of the dragon, do not be unnecessary alarmed as the charts are to be read in totality and an individual charts consist of 4 pillars denoting 4 animals and 4 elements and the controlling animal and element is indicated).

We will expend a bit more here in an attempt to relate the charts of the nation with the Black Dragon, the chart for Malaysia using 16 September 1963 shows Malaysia has the controlling element of the Water Dog in a year of the Water Rabbit, the Water Dog year for Malaysia is again in direct opposition with this Black Dragon and this Dog is in fact the arch enemy of the Dragon, indicating real conflict denoting imminent change.

There is just too much water and the water element is just overwhelming it’s like an overflowing dam about to breakout. Remember water is also symbolic of the masses in this case the water represent the Rakyat which is strong and overwhelming,

However I would like to add a word of caution here that this writing should not be taken as a definite happening as in all events the fate lies in your hands not in any astrological charts which we use only as an indicator of possibilities for guidance and in strategic approach.

The Fate of the Nation lies in the Hands of the Rakyat and only the Rakyat can determine the future for their children and theirs to come, only you can make things happen for the better, the future of all our children depends on us all in unity like the great force of the Water of the Black Dragon.

MAY YOU TAKE OWNERSHIP OF YOUR HOME COUNTRY IN 2012!

Thank you, Hawkeye, and all blessings upon you!