Singapore Most Competitive in Asia and Malaysia is.. 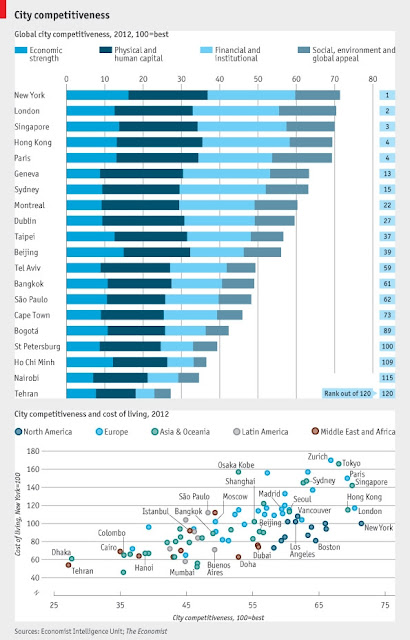 Singapore is rated the 3rd most competitive cities after New York (1st) London (2nd) and the most competitive in Asia in a study by the Economist Intelligence Unit commissioned by Citigroup Inc.


The report covered a total of 120 global markets, assessed on the basis of 21 qualitative and 10 quantitative indicators.


It defines competitiveness as the demonstrted ability to attract capital, business, talent and visitors.


In Asia, Singapore topped the list as the most competitive followed by Hong Kong and Tokyo.


Asian cities dominated the economic strenght category, the most highly weighted category with fifteen of the top 20 cities for economic strength from Asia with 12 cities from China.


Mr Michael Zink, head of ASEAN and Citigroup country officer for Singapore said: "It's a terrific place to do business - it's very open and global city and we have the opportunity to compete fairly and evenly against domestic players."


"The playing field here is quite level. So as long as we can continue to compete domestically, we'll continue to invest.And as long as Singapore maintains its competitiveness against other financial centers around the world, I can see us continuing to bring more and more activity into Singapore"


And oh ya er.. Malaysia's capital of  Kuala Lumpur is rated at no. 45 most competitive and in the economic strength category it stands at no 44 below Jakarta at no.43, Ho Chi Minh at no.36, Hanoi at no 20. And nothing very much further to report on Malaysia's ranking except that it is quite embarrassing falling behind most of its lesser neighbors.


Malaysia must learn from this little neighbor down south if it wants to improve and to be an advance nation like Singapore, many of the experts doubt that Malaysia can ever catch up with Singapore in the next 50 years if umno continues to govern.


An extract of the Executive Summary from the Economist:

Well over half of the world’s population now lives in cities, generating more than 80% of global

GDP. Already, global business is beginning to plan strategy from a city, rather than a country,
perspective.


Given the rapid growth and development of many cities, particularly in emerging markets such as China and India, competition between them for business, investment and talent will only get fiercer.


Size alone does not determine a city’s growth potential. While some megacities, such as New York and Tokyo, are immensely influential, there are smaller ones, such as Hong Kong and Singapore, which have established themselves as globally competitive centres in recent years.


Meanwhile, emerging market cities such as Ahmedabad and Tianjin are witnessing double-digit economic growth and have the potential to grow even faster.


Competitiveness, however, is a holistic concept. While economic size and growth are important and necessary, several other factors determine a city’s overall competitiveness, including its business and regulatory environment, the quality of human capital and indeed the quality of life. These factors not only help a city sustain a high economic growth rate, but also create a stable and harmonious business and social environment.


With this in mind, the Economist Intelligence Unit (EIU) was commissioned by Citigroup to develop a “Global City Competitiveness Index” to rank cities according to their demonstrated ability to attract capital, businesses, talent and visitors.