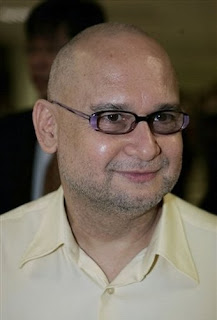 PETALING JAYA: The Malaysian government has charged a prominent blogger, Raja Petra Kamaruddin, with sedition for an article he wrote on April 25 on his website, Malaysia Today.


The article has linked Deputy Prime Minister Najib Razak and his wife, Rosmah Mansor, to the gruesome killing of Mongolian model Altantuya Shaaribu in October 2006.


The 58-year-old blogger has also accused Prime Minister Abdullah Badawi for withholding crucial evidence in a bid to protect his deputy.


Raja Petra , who is known by his initials 'RPK', has pleaded not guilty and has insisted that the charges were trumped up against him.


He said: "UMNO or Barisan lost the internet war and they said Malaysia Today is one of the leading culprits. This is merely an excuse to arrest me, detain me and to charge me."


Raja Petra has vowed to continue blogging even if he is put behind bars. His lawyer Karpal Singh said this is a test case with serious, far-reaching implications.


"It appears to be a warning to all bloggers. As I said, I only hope this is not the beginning of other bloggers being dragged to court. Let this be a test case as to how far the government can go to charge bloggers for an offence under the sedition act," said Karpal, who has urged the prosecution to withdraw the sedition charge, saying it is more appropriate for the affected parties to sue Raja Petra for defamation.


While a campaign is on to raise funds for his bail, Raja Petra – who will be tried this October – has been put behind bars.


If found guilty under the sedition act, he may be fined up to US$1,500 or be jailed for up to three years, or both.
Posted by Unknown at 2:36 AM