As Reported by CNN 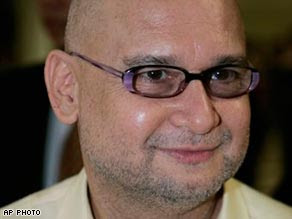 Trial set for October 6, if convicted, he faces up to three years in jail

KUALA LUMPUR, Malaysia (AP) -- A prominent Malaysian blogger was charged Tuesday with sedition for allegedly implying the deputy prime minister was involved in the sensational killing of a young Mongolian woman.

Raja Petra Raja Kamaruddin, who has not denied that he linked Deputy Prime Minister Najib Razak to the slaying, pleaded innocent to the charge, telling reporters that he should have the right to hold the powerful accountable for wrongdoing.

He was taken to prison after he refused to post bail. The court set the trial for October 6. If convicted, he faces up to three years in jail.

"I am not posting bail. See you guys in October," Raja Petra told supporters before police took him away. "I will be out for Christmas. Don't worry."

Dozens of opposition members and bloggers gathered to show support for Raja Petra outside the Kuala Lumpur court where he was charged.

"This is an attempt to clamp down on all sorts of freedom," said Nurul Izzah Anwar, an opposition member of Parliament and daughter of opposition leader Anwar Ibrahim.

The sedition charge stems from an April 25 article that Raja Petra posted on his popular Web site Malaysia Today.

The article allegedly implies that Najib and his wife, Rosmah Mansor, were involved in the 2006 killing in Malaysia of Altantuya Shaariibuu, a 28-year-old Mongolian interpreter.

Abdul Razak Baginda, a close associate of Najib, is charged with abetting the murder. Two policemen have been accused of killing her and destroying her body with explosives in a jungle clearing. The trial of the three men began in June 2007 and is under way.

The prosecution contends that Abdul Razak had the woman killed because she pestered him for money after he ended their affair.

Raja Petra said he was not worried by the sedition charge and suggested he had evidence against the leaders.

"Is it seditious to influence people against corrupt leaders? There is nothing seditious," he said. "Do you think I do not have evidence?"

Some of Malaysia's most popular blogs offer strongly anti-government commentaries and present themselves as a substitute for mainstream media, which are controlled by political parties or closely linked to them.
Posted by Unknown at 2:14 AM