EVIL in the Midst 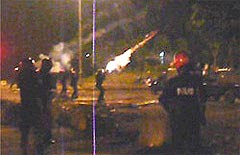 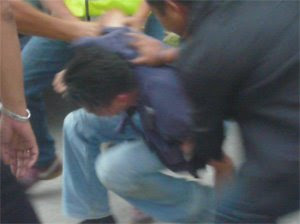 "If the legal system is unjust and when laws are not fairly enforced, Government officials will be complacent and Evil doing will abound."
- old chinese proverb -

Looks like now they are gonna come get you fellas with all the dinosaur act or laws of terror or scare the shit out of you stupid Malaysians, well it work for a long time and it fail or almost lost the whole shit when they pretend to be nice and give sweet words of promises if not for some faraway backwaters states cut off from the technology of the day that only can vote for the same shit time after time or maybe or hopefully anwar ibrahim can change that and bring these people to their senses and join the Pakatan Rakyat, the party for all Malaysians!

So first they got NST to sue Rocky and Jeff and the case is still pending and with almost 1 million backlog cases pending in court, it will probably take 10 years anyway.

And than hastily come up with the thump up charges against our champion Raja Petra of Malaysia Today, they have charge him with the grand old Dinosaur Act called the Sedition Act. Read the champion's full story here: http://www.malaysia-today.net/2008/content/view/7156/84/ and they also charge Syed Akbar for making a comment in Malaysia Today.

Than they harrass Harris Ibrahim with his candle, read his recount here: http://harismibrahim.wordpress.com/2008/05/09/the-night-one-candle-proved-to-be-one-too-many-for-the-men-in-blue/

Now they are making stupid noises about our old warhorse Karpal Singh and he too might be charged with sedition. Can someone go tell these Fools that this tactic won't work anymore.

And more than that, look at the police brutality in the handling of the Cheras Mahkota residents when all the people there wanted was some convenience in traveling to and from work and to save a few cents, especially in this present times of rising cost and food prices! And the police went to protect the Pirateers and they use violence on their fellow citizens.

Fools! The fear tactics no longer work! Continue with this unjust approach and i will guarantee you that come next election we will make sure that you are booted out!

We are the masters and you are but only servants! Stoopid Fools! Don't you guys get it? Nobody likes Bullies! Damn Fools!