RPK In the News My SinChew 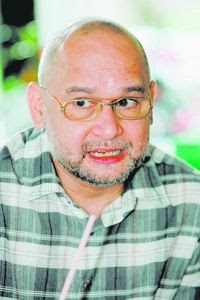 
1 of 2PETALING JAYA: In a dramatic turn of events, controversial Malaysia Today news editor Raja Petra Kamaruddin was Tuesday (6 May) charged with sedition at the Petaling Jaya Sessions Court over his article which implicated Deputy Prime Minister Najib Razak and his wife, Rosmah, in the murder of a young Mongolian woman.

“I knew it was coming,” RPK , as he is popularly known in blogsphere, told reporters, looking as if relieved that the death knell finally came.

Raja Petra claimed trial to the charge. He was charged under Section 4(1)(c) of the Sedition Act for publishing a allegedly seditious article on April 25 on his Malaysia Today portal.

Hearing has been fixed from 6 to 10 Oct and Raja Petra was granted a bail of RM5,000, but in his trademark defiance, he refused bail, deciding instead to remain in custody until the hearing date. His wife, lawyers and friends tried persuading him to post bail but to no avail.

If found guilty, Raja Petra could be jailed for a maximum of three years and/or face a fine of up to RM5,000.

The charge sheet highlighted nine paragraphs of the article which was titled "Let's send the Altantuya murderers to hell" as seditious.

Deputy Public Prosecutor Nordin Hassan is prosecuting while Raja Petra was represented by a team of six lawyers led by Karpal Singh.

Rumours have been making the rounds of his impending arrest ever since he penned an article "Let's send the Altantuya murderers to hell" which alluded to Deputy Prime Minister Najib Abdul Razak and his wife in the killing of a young Mongolian woman.

RPK was arrested following publication of the article on his immensely popular website but was let off after he refused to cooperate.

But since Monday (5 May), text messages have been furiously flying around that RPK was to be arrested Tuesday and charged with sedition.

Late Monday the popular webmaster was ordered to surrender at the Jalan Duta court complex at 9.30am this morning to face a sedition charge. He appeared there in his usual yellow T-shirt and while waiting to be charged at the Kuala Lumpur Magistrate's Court, he received a telephone call from the police at about 10.20am asking him to go to the Petaling Jaya Sessions Court instead.

Raja Petra said that he was a victim of political persecution.

"I knew this was coming. They are going to find ways and excuses to charge me but these are stupid excuses," he said.

"Once they charge me, we will show that there is no evidence against me," he added.

He said an Umno leader from Petaling Jaya (Utara) had said about three weeks ago that "they should find ways to arrest me".

Last Friday, Raja Petra was called in by the police to have his statement recorded over an Internet posting two weeks ago pertaining to the murder case of Altantuya Shaariibuu, a Mongolian national.

On 25 Apr, Raja Petra posted the article titled 'Let's send the Altantuya murderers to hell' on his blog, Malaysia Today. The posting implicated Najib and his wife Rosmah Mansor in the high-profile case.

Najib subsequently issued a denial through his press secretary Tengku Sariffuddin Tengku Ahmad, whereas Rosmah has also denied the allegations against her. The Altantunya murder trial is currently ongoing at the Shah Alam. (By BOB TEOH/ MySinchew)