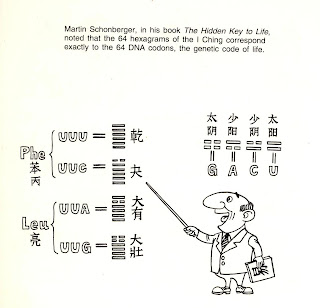 Many questions have been posed to me of this classic of change and most thinks that it is some kind of fortune telling technique or set of ancient stories of the history of china and some affiliated it to religion like the Taoist and some thinks that it is for feng shui and some even thinks that it has got some magic spells or talismanic powers.

And all this while I thought that the i-ching is well known as it had been a subject of studies in western universities and many a thesis have been written in present times by modern scholars.

Alright we will provide a little more insight into the I-Ching or Yi Jing (pinyin) and also known as Zhou Yi with further description and links to sites for greater readings and understanding in this posting of Part II to show you the incredible science of this ancient classic which is still being studied and explored in this present modern times all throughout the world and is not only a chinese subject.

My earlier exposure on the i-ching than was in the late 70s due to an interest in the history of the middle kingdom and in the early 80s I joined a study group based in the Selangor Chinese assembly hall which is a small group of people who gather to discuss the essence of the book of change through the i-ching studies association. However I was having a difficult time in this study group as the medium used was in mandarin and me being a white Chinese (banana) soon got bored as my understanding of mandarin than was quite limited but at present has greatly improve the spoken language due to recent influx of china dolls but had never got to read or write the language. : ))

The first i-ching book I bought was in 1978 and that was the first and only book than in English by James Legge which was first published in 1964, but this type of books are quite dry for beginners and not much of comprehension could be obtained from reading it. And subsequently a few years later in the 80s I came across a seminar on the i-ching in Singapore at the hotel that I was staying conducted by a Dr. who is an adviser to the Singapore ministry of defense and that ignited my interest in this subject as through my readings of Chinese history many mention of the classic are found and especially when you come to the teachings of Confucius as he once said that if he had more life to his years he will dedicate it all to the study of the classic and as he only came to the classic of change at an age of 50. But I must say that I had never considered my self an expert ( as did Confucius says that this study is infinite) as my approach to the classic is at laissez-faire although it has been an interest for 30 years or more.

The I Ching or Yi Jing 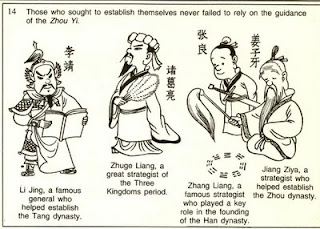 The i-ching also called the classic of changes and book of change is the oldest texts in the world and the I ching has survived various revolutions as the Shih Huang Tee burning of books and along with the scholars who were buried alive and all this while the i-ching was spared and preserved throughout the various dynasties as it was considered to be sacred by the scholars in the emperors court.

The book is a system of symbols called the hexagram which is a combination of solid and broken lines of 2 sets of 3 lines called the trigrams together with written texts of poem and poetry by the ancient sages as well as an appendix called the ten wings by Confucius.

The i-ching is a universal laws of all sciences even on to medicine as the fame ancient medicinal doctor “Wah Tor” of the three kingdom fame ( about 2000 years ago) who was associated as the first doctor who does open surgical operations on his patients and is widely worship as the god of medicine/doctor and could be widely seen in Taiwan in hospital, clinics and pharmacist and etc. And from the i-ching comes many other philosophies which is actually the sciences in olden days like Feng Shui (geographical study of magnetic energy), accupunture and herbalist medicine and the teachings of the Taoist Lao Tze as in the Tao Te Ching, cosmology and astronomy , as well as governmetnal management and administration, startegies and warfare and more in historical china.

The i-ching is a reflection of the universe and the word “I” has three general definitions as in 1) ease and simple 2) change and transformation and 3) invariable or constant and described as the constant of change “Change is continuous and the only constant is that it is constantly changing”.

A description can be found in wikipedia here and an extract from wiki as follows;

Many famous western scholars of scientist, physicist, psychologist, engineers, mathematicians and all groups of sciences have studied the i-ching like Albert Einstein, Carl Gustav Jung (the swiss psychiatrist), Martin Schonberger on I ching and the DNA, Danish physicist Neils Henrik, German mathematician Gottfried Wilheim associated with the calculus and the basis of computers, Joseph Needham a British bio chemist who heads the Natural Science division in UNESCO and founded the Needham Research Institute dedicated to the study of China’s scientific history and patronized by Prince Philip the duke of edingburgh and many others which is quite impossible to describe all of them.

In his article Explication de l'Arithmétique Binaire (1703) Gottfried Leibniz writes that he has found in the hexagrams a base for claiming the universality of the binary numeral system. He takes the layout of the combinatorial exercise found in the hexagrams to represent binary sequences, so that ¦¦¦¦¦¦ would correspond to the binary sequence 000000 and ¦¦¦¦¦ would be 000001, and so forth. Gottfried who is highly famed for his founding of calculus and a discovery of the binary system (apparently from his studies of the i-ching), he occupies a grand pplace in the history of philosophy and the history of mathematics and also made major contributions to physics and technology and biology, medicine and even geology, probability theory, psychology and the list is endless as he even wrote on politics, law, ethics and theology. And all this was through his studies of the classic book of change. (Amazing!)

And yes the i-ching is so powerful that it is also considered as an oracle and can be used for divination, forecasting, prediction and problem solving.

We shall go into finer details and the approach of the gua or hexagram no.43 for greater insight for the “Sept 16” of change in Part III. (coming soon)

Links here for further readings; I Ching (The Book of Changes) and I Ching Bookmarks and The I Ching

For Part I Go Here

Thanks Hawk for this knowledge and truly enligtening.

I find your report very informative and a true perspective of this book of change. And some of those idiots in the comments at mt dont know shit about this stuff.

Isn't the Pak kua is the basis of the i ching and they are used for feng sui and pa zi analysis?

This book came with a CD for the reader to use instead of tossing the six coins.

It was accurate for me in divination.

I am not able to provide the ISBN. Online book search also does not help.

hi guys,
the pa kua is a symbol and representation of the trigrams and polarity ie yin yang or the binary and you are right that it is a fundamental use in feng shui representing directions, the 5elements, the seasons,nature and etc. And also basic knowledge for the i-ching. Ba xi (destiny analysis) also requires understanding of the trigrams and a lot of cosmology and the hsia calendar etc.

hi penang tionghua,
yes i have seen the book by Ken Yang the architect and i remember there was another engineer who wrote about the i-ching and the purple star system.

As for computer coin tossing.. haha.. maybe it could work as the more important is in your self and not the style or tools used for building the hexagram and some i-ching internet sites do provide the facility but so far i have not tried them.

Your state of mind is important and is suppose to be in quiet rectitude when in consult of the oracle.

the i-ching is not all about divination and there are great learning from it as you can see in this part2 posting.

Well thanks for your comments and question and best wishes to you.

15 years ago, I did a self study from books(no Internet yet!) on I-Ching and made a number of accurate readings based on events and expressions.

This was done after weeks of research from the available books from the Birmingham Public library (UK) and notes I surmised from the english authors who translated the ancient texts. No need for coin tossing or yarrow sticks divination..:)

hi samson,
will be glad to share notes with you.
I should think that you are talking about the "mei hua" flower approach, no coins or yarrow stalks, right?

the time is about right for part 3, haha will keep you posted.