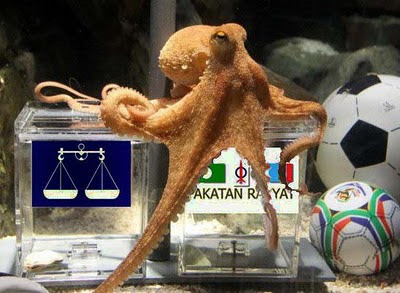 Private Investigator P.Bala escorted by RPK was in Paris to be questioned by the French authorities over the investigation into the controversial Scorpene submarine purchase by the Malaysian government, they were with the Paris Police deapartment for many hours yesterday and was requested to return the next day.

With some free time to spent the duo went across to Germany to visit Paul the Octopus and requesterd for a prediction on the Malaysian next election of GE 13.

Since after the World Cup Paul has been quite bored and after much persuasion finally relented to their request.

And after which i received this photo through the email this morning. Was informed that Paul was treated to a meal of Malaysian "La La" instead of the usual mussells.
Posted by Unknown at 2:22 PM

After the final whistle was blown there was a great Silence in all of Holland.