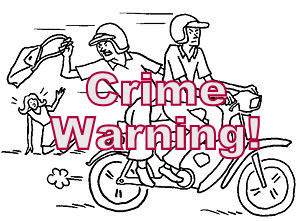 Crime is still rampant in Malaysia and especially in the city of Kuala Lumpur.


Just got a call from April about two hours ago and she sounded quite shaken as she recounts the event of how she was driving and came to a stop at the traffic light junction in the section 17 area of Petaling Jaya when  two person on a motor cycle pull up next to her car than smash her passenger side window with a hammer and snatch her handbag. The  crime took place at approximately 11pm just about 3 hours ago.

April lost her handbag with some cash in her purse, handphone, all her cards including her id card and driving license. She also had her camera and other accessory in her handbag that was snatched and had to spend hours in the police station making her report.
I have consistently warned and reminded especially the ladies to placed their handbag under the driver seat when they are driving alone and no other place in the car can be safe in this crime infested city of ours. The handbag or lap top should be under the driver seat if you are driving alone, please remember this for your own safety.
A few weeks ago a friend of a friend had their house broken into when they were sleeping at home and were bounded and gag by the three intruders with knifes and parang in the Taman Midah location of Cheras. And the same friend informed me of another snatch thief incident in the USJ Subang Jaya area just as the lady got out of her car the motor cyclist rode up behind her and snatch her purse as she alighted.
There has not been much media reports in recent months of snatch thieves and other street crimes from the main stream media owned by the Barisan National parties but that does not mean that all is safe and quiet, it is just that they were not being reported by the controlled press.
Malaysians and especially the city folks should make known of these crime stories and there are alternative avenues, as they could informed the blogs under the comments section or the Internet media if they are victims or know of a friend who are a victim of crimes so as to forewarned their fellows in the neighborhood of the crimes and this will heightened consciousness and greater precaution could be taken.
But sometimes i just could not help feeling the self centered people of this city where all they think about is towards their own selfish benefit and could not be bothered as long as they themselves are safe and not being disturbed or all they care about is making money for themselves as like the BN political culture where the primary concern is whats in it for me and how much can be made for myself.
All the PR hype of NKRA and all these other fanciful acronym can't convince me of their will and determination to fight crime as the fundamental cause of rising crime has not yet been investigated and sorry to say that they are at a loss as to the approach to resolve the scourge of rising crime which is radically a social problem.
Everywhere you go in this country people are barricading their neighborhoods some with makeshift gantry and oil tin barrels and wooden crates and the more affluent neighborhoods are employing Gurkha guards and guards in patrol with guard dogs even in one neighborhood that i saw. And that is not enough as some have rewired the whole house in installing burglar alarms and CCTVs and the home is completely grilled up like a damn prison another bungalow that i have visited in a gated and guarded community had 3 big guard dogs of Alsatian and Rottweilers.
What is happening to us and since when do we need to live in such a state, a state of fear and of anxiety for our families.This is an unconsciousness state of chaos and turmoil in the nation.
Public security is a primary responsibility of the government and if the government that could not provide this basic safety for their citizens than that government is a total failure and not fit to rule.
I will like to end this writing by sharing with my fellow Malaysians an old Chinese proverb;
"If the country is in chaos and in turmoil it is the people who must take equal responsibility for the state of their nation."
-An Old Chinese Proverb-
Posted by Unknown at 2:38 AM

Email ThisBlogThis!Share to TwitterShare to FacebookShare to Pinterest
Labels: Crime

But Some People Treat Others As Second Class Citizens.So Let Me Ask You In Return, How To Be Loyal In Return?

Sorry, should be 5 class citizen after the Indon and Bangla.

the snatch thieves and the corrupt politicians are all the same breed. Both are thieves after your money,

I would like to exchange links with your site www.blogger.com
Is this possible?