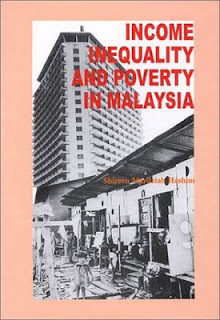 Malaysia government announced subsidy cuts will result in the increased of petrol, diesel, kerosene, gas and sugar which will spur consumer prices and add inflationary pressure on its majority of low income households. Cost of living will soar and the low income group which makes up more than 70% of the total Malaysian households will face greater hardship and sufferings.(70.7% of Malaysian household earns less than 4000 ringgit a month).
The Malaysia Institute of Economic Research (MIER) has just announced on the same day  that the Malaysian economy growth is expected to slow considerably in the second half of this year. MIER forecast that consumer prices will rise 2.2 per cent this year and added that inflation has climbed by 1.6 per cent in May from a year earlier which is the fastest pace in a year as food and transport costs rose with the strenthening of the economy in the first quarter.
And this forecast from MIER has not taken into consideration the recent subsidy cut which was just announced on the same day as the statement relesed by the institue.
The China news agency Xinhua news just reported that the Malaysian economy challenges may turn intensive in the seond half of this year.
Prime Minister Najib was reported to have reminded on Tuesday that the growth momentum may slow down in the second half saying that the strong growth in the first quarter may not be sustained.
The government said the subsidy cuts, projected to save 750 million ringgit this year, are the first in a series of steps in a "gradual subsidy rationalization program."
What is 750 million ringgit to the government when it expended billions and billions on unnecessary wasteful projects and  we have a defence budget of some 20 billion?  And the Prime Minister deaprtment alone has an expenditure of RM4 billion ringgit?? And what about the multi billion stolen through corruption?
Well done Najib, the majority of your people will suffer.
Read Xinhua report, Malaysia Economy may turn Intensive HERE.
Posted by Unknown at 3:17 AM

The tiny red dot is the fastest growing economy and Malaysia is the slumping economy?

Thanks to all who voted for Barang Naik.We deserved it.Malaysia tetap Bole, the one and only.

Thanks for spelling out in precise terms the negative impact the finance minister's ill-advised decision will have on the rakyat. These parasites have no clue what it's like to lead "ordinary" lives and pay electricity and internet bills out of their own pockets!