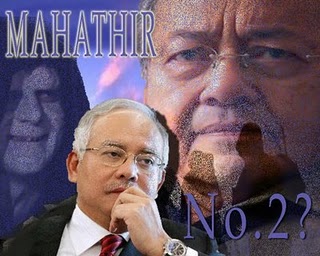 Najib's strategy leading to the 13GE seems to be that the bottom line is BN stays at Putrajaya in the aftermath, whatever it takes. His armies of the Special Branch, police, EC, BN machinery are all hard at work to ensure that. The signs that come from the ground seem to be that a victory will not come easily for BN. Najib has then to look for another way, and that is the unfortunate course for the nation.

The 13th general election is coming. Logically it has to come by March 2013. Yes, logically it is coming. When will it come, and indeed will it ever become a reality? That is a question plaguing a difficult nation. Since becoming PM, Najib Abdul Razak should have been keen to seek a new mandate from the people. Is he a leader by popular choice, or does he reign by a borrowed mandate, and an unconvincing one at that?

For Najib, unlike the more civil Abdullah Ahmad Badawi, it is not elections which he is looking forward to, but how to secure victory by hook or by crook, or indeed how he can remain at the top in a reasonably legitimate way. Over the few months that he is a leader, the term 'legitimate' has become so indeterminate.
To go for all-out elections is suicidal, at least for the near future, for Najib's administration. That Najib himself knows very well. Out of the eleven by-elections the nation has seen since March 2008, BN only managed to secure only three wins, namely in Batang Ai, Bagan Pinang and controversially in Hulu Selangor. The latest BN loss in Sibu sent shivers through Najib's camp; has the tsunami actually reached the East Malaysian coast?
These were indeed bad omens for BN – and the nation. Najib is a fighter, one who does not shy away from street fighting. He is a new breed of BN leader, one that BN desperately needs to win back the loss former PM Badawi seemed so willingly accepted (for which the latter has been punished). That Perak was won back amidst legal controversies is one of Najib's signatures. He never keeps it a secret that Selangor should also be won back at any price, and his army is working on it.

Najib's strategy leading to the 13GE seems to be that the bottom line is BN stays at Putrajaya in the aftermath, whatever it takes. His armies of the Special Branch, police, EC, BN machinery are all hard at work to ensure that. The signs that come from the ground seem to be that a victory will not come easily for BN. Najib has then to look for another way, and that is the unfortunate course for the nation.

Malaysia has not known, barring the dark days of May 13, 1969, a violent confrontation between her various races and religions. Indeed the people of Malaysia have learnt that they have to live with each other and even generally agreed that plurality is a blessing, not a curse. The vast majority of the Malaysians seem to be rational enough to avoid the racialist path to solving problems. That is not to say there has not been violent outbursts, but the latter seem isolated and readily resolved.

Therefore, the events of the past months just do not tally with the prevalent trend. Everywhere suddenly one sees signs of intolerance. There was the event of the cow head in Selangor and the desecration of churches. Now one sees headmasters or principals, one after another, hurling racist remarks. The episode of the Friday sermon in Penang is another point in case. The latest was the Surau in Seremban.

One cannot help but pondering whether the nation is spiraling towards anarchy … All these point to some sinister forces at work, with a common objective - to poison the atmosphere on the road to 13GE. That they are widely-reported by the main media shows someone wants it to prove a point. (It has been an open secret that the mainstream media exercises self-censorship and sometimes with advice from the power-that-be, and 'sensitive' news, which may give negative perceptions about the country, do not easily get reported).
Another sad thing is that the police seem quite incapable to prevent these incidents, and even more impotent in determining the culprits. We are talking here about the same police which had so efficiently quelled street demonstrations, stopped opposition ceramah, and even incriminated peaceful vigils in support of the ISA's abolition.

Finally, the response from the BN leaders have been wanting, and unbecoming, of a legitimate power.
All these are indeed bad omens for the nation. Unless the authority takes serious step to preempt further such incidents while bringing the culprits behind previous ones to book and punish them heavily, one cannot help but to conclude that we are witnessing is anarchy – planned anarchy, perhaps, because that is the only way BN can remain in power post-13GE. - Malaysiakini
Posted by Unknown at 12:40 PM

so they think we care...

if he so want another May 13, it will be the amno malays against the non-amno malays.

and the rest of us will be pulling out our easy chair and watch them whacking each other to pulp, yah?