Brain Tonic For Our Politicians! 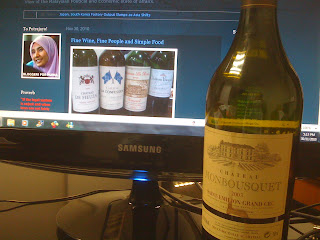 (Just finish a fantastic bottle of Chateau Monbousquet 2003-Rated 93/100 Wine Advocate)
Think we have found the solution for our hare brain politicians as it was reported by Italian scientists, Alberto Bertelli and his team from Milan University that they had tested the chemical called Reservatrol on the human neural nerves and found it made the cells grow small extensions through which they connect with other neuron cells.

They reported that the chemical produced by grape vines and are concentrated in both grapes and wines triggered a seven fold increase in the activity and effectiveness of the enzyme "mapkinase" which stimulates and regenerates nerve cells.

A glass or two a day could help stave off neuro degenerative diseases such as Alzheimer and Parkinson according to the  Milan team of scientists. "Reservatrol allows the brain cells to repair and increase connectivity and reconstruction which reactivates the neuron ability of the elderly to remember" said Alberto Bertelli.

So here we should recommend wine drinking to our politicians in the hope that it could increase their intelligence and that we people would be free of the daily nauseating bombardment of political stupidity expounded by the ministers and politicians of this country.

Much as I would like everyone to be clever but in this case are we not asking too much ? We should not waste such good wine on people beyond hope or salvation. Let us just enjoy it ourselves while we still can.

I wish M'sia well but deep down I know all is lost. I believe all readers out there know it too .......