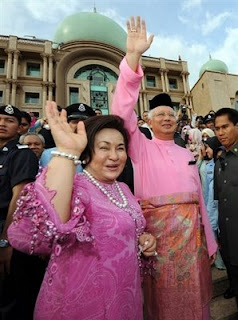 We first heard of a Muhyiddin - Hishamuddin pact some time late last year, there was apparently a secret meeting towards this understanding of the terms of the pact where they will take over the leadership of the country in the in-eventual departure of the husband and wife team or should it be wife and husband team.

And later sometime in March this year there were some buzz in within the inner circle of a 3M Team of which were made clear today with the recent article in the Malaysian Chronicle HERE and in Malaysia Today HERE.

But this insight provided by the Finance Twitter website clarify and sum up all the information we heard from the grapevine, truly an illuminating article as follows:

Resign or Snap Election for Najib, Here're the Reasons
By Finance Twitter


As much as I would like to stop writing about PM Najib administration, the plot just got interesting and I think he may just hit the bull’s eye as far as my prediction that his downfall may be faster than his predecessor, Abdullah Badawi, is concerned. Compared with Najib, Badawi now seems like a cute adorable little kitten, who merely likes to sleep (on the job). Malaysians tend to be more forgiving on lazy prime minister but not a prime minister wholies, cheats, brutal, dirty (allegation on Mongolian Altantuya’s murder),hypocrite but above all stupid yet arrogant.
One cannot help but fell off the chair laughing after read that Najib said he cancels a family vacation because he wants to spend more time with Malaysians. This was perhaps the best joke ever by premier Najib since he took over from Abdullah Badawi. This joke actually worth a thousand “Like” on his facebook page. Forget about Bersih 2.0 because this guy may quit under pressure – not from opposition parties or Bersih 2.0 but from his internal UMNO party. Boy, if it was true that the US$24 million controversial diamond ring indeed belongs to his wife Rosmah Mansor, that ring is cursed.
Anyone notice the deadly silence from Mahathir after the Bersih 2.0 rally that instantly flush Najib’s popularity into the toilet bowl? I’ve wrote earlier that Najib administration’s extreme stupidity in tackling the simple issue of Bersih 2.0 made the whole episode smells rat. Najib can’t be that foolish (or was he?) and even if he was indeed stupid, his wife would have save the day, unless of course the plan to unseat him has been brought forward by his own circles.Mahathir doesn’t like Najib for two main reasons - his wife and his close connection with Singapore Government.
It seems Najib may have to quit soon, probably before his term expires in 2013. And if Najib plans to stay until next year to enjoy more free overseas holidays using taxpayers money under his capacity as the prime minister, his dream is now short-lived based on his emergency return to take control of Putrajaya. How on earth could everything turns upside-down before his “shopping” trip to United Kingdom and Italy ends? It appears he has no other option but to call an early election, possibly before 11-11-2011 in order to neutralize his enemy from within UMNO, if he’s able to do that.
Read the Full Article HERE