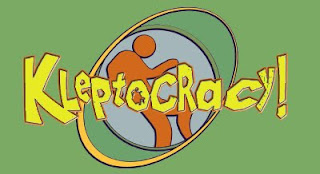 I like this article which was published in Malaysia Today.

Kleptocracy is a government of thieves, by thieves and for thieves. The ruling elite in a kleptocracy governs only to extend its personal wealth and political power by stealing from the state’s coffer.


The major characteristics of a kleptocracy are rampant corruption, rent-seeking activities, money-laundering and abuses of human rights.
Since a kleptocracy benefits only a small section of the population at the expense of the wider population, the modus operandi of the kleptocracy to stay in power is to divide the population along tribal, racial or religious lines.
Contemporary kleptocracies often maintain a facade of democracy to camouflage their kleptocratic tendencies. A kleptocracy may have a state constitution, though it is regularly abused to suit the whims and fancies of the ruling elite. Regular elections are also held to enforce the notion of a democratic state. The elections are rigged and manipulated to provide legitimacy to the kleptocracy.
Government agencies such as the judicial system, the civil service, the legislative body, the security forces and even the church act as apparatchik of the kleptocracy. The officials holding key positions are rewarded by having a share of the loot.
Read the Rest of the Article HERE
Posted by Unknown at 5:20 PM

Here we go again, another fiasco in the making, another circus display of 'misplaced' governance that makes you wonder if anyone in the country is safe from the authorities anymore and if intelligence is no longer a pre-requisite to work for its religious department.

Any government with goons running around and gate-crashing other people's party must be a worry to citizens anywhere. The Malaysiakini report on the 'illegal' and unconstitutional Jais raidon the Dream Centre, a community place run by the Damansara Utama Methodist Church, reflects a government department with nothing better to do than harass law-abiding citizens going about their business peacefully.
With thirty enforcement staff led on a wild goose chase when they could be more productively employed during the season of Ramadan is indeed bewildering but not unexpected when you follow the script of an unholy plot and belong to Malaysia's version of the Keystone Cops, those comical cops always chasing someone but only making fools of themselves and making us laugh at their expense.
But the Jais raid on the Dream Centre is no laughing matter.
It is an attack on the constitutional rights of citizens and an unprecedented low on the persecution of the legitimate activities of citizens in the country by a government department that seems to act with intrusive impunity and that gets more ridiculous by the day. Is religious paranoia following after race that has failed to divide Malaysians after the evident show of unity by Malaysians of all races during the Bersih 2.0 event? They accused certain Muslims and now they are accusing Christians. Who's next?. Really disgusting!!!