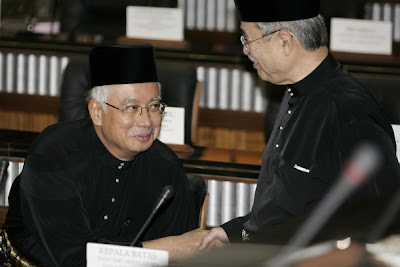 (Like the above headline from Sin Chew.) They have strike a deal on who shall become the next PM of the country and yes the Prime Minister of the country is elected by one man only and on the terms and condition as agreed upon between themselves. Pak Lah said "Datuk Seri Najb and I have decided on the right time for me to hand over the premiership to him." as reported in Malaysiakini.

What about the so called coalition government of Barisan National, oh forgot! the other component parties are just an UMNO tag along and it's got nothing to do with them and their views are never seek nor considered. What about the Agong, isn't he the one who appoints the PM?

What about UMNO? Do they get to vote for their leader? Don't even remember when they had their leadership elected and it seems like a long long time ago and even than the party and their members' view have not been sought. In the BN government it all boils down to just one or two person that decides what is best for the country. The party and its members' view are not significant for such an important position as the Prime Ministership of the country and no need to mention the other coalition party of the BN as they Become Nothing.

Glad you like it and thank you for visiting. :)

Najib will never be PM.