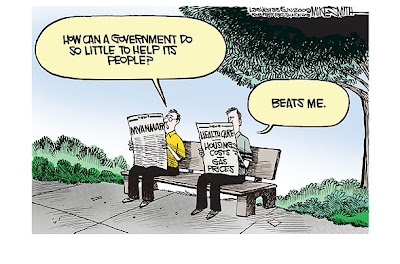 Most of the city folks that I spoke to are in fact in accord towards the gradual abolishment of Fuel Subsidy or somewhat of a reduction however it is the drastic and hasty actions adopted by the BN Government towards this end which reflected on an unduly and ill considered decision.

As usual this government has terrible communication with inconsistent messages being disseminated to the Rakyat all throughout leading to the sudden decision. Earlier announcements from the Minister were that come August there would be some reduction in the subsidy or at least that is the perception of the public and loads of other confusing decisions and media reports as well as the perplexity on the sales of fuel to foreigners entering the country. And coupled with the announcement of oil royalties and their distribution which has raised many questions of which the government has so far been just keeping silent.

It is common sense and does not require a high powered committee to tell you that the deduction has to be gradual and that the effects and those that are most affected be it individuals or industries have to be addressed. What with such hefty increases of 40 and 60 percent which will create a spiral upwards of all cost of goods and services in the country as fuel is the essential cost of all and everything.

And recently when MTUC (Malaysian Trade Union Congress) called for an increase of the minimum wage to Rm900 and a cost of living allowances and which was not being considered by the government, 40 percent of MTUC members earns Rm700 per month which is just above the poverty line of Rm691, and who defined this amount as to be qualified to be poor? And may almighty god help them now with this heavy increase in the cost of living.

The headlines by the Singapore Channel News Asia titled “Malaysia Scrambles to Soften Fuel Price Blow as Protest Looms” aptly describes the Government ill conceived actions and now suddenly all kinds of measures are hurriedly announced. But Salahuddin Ayub, youth leader of the Islamic opposition party PAS, said that as a net oil exporter, Malaysia did not need to implement such a drastic overnight increase.
"We are really very sorry that it has to be this way but it seems the government led by Abdullah has been stubborn, and has not listened to the people," said Salahuddin.
"We will peacefully protest until the government does something to address this issue and review their decision," he added.

And in the tradition of the BN government, another High Powered Committee has been formed and called the “National Inflation Council” and hot off the press the members of the council have been named as follows:

Abdullah also announced the formation of three committees – the first to look into more efficient use of energy resources, the second to enhance public bus service and the third to improve dissemination of information to the media.

Oh My God! Now how are these guys going to meet and won’t such a committee be costly to maintain and won’t it distract them from their primary duties? Just imagine when these guys goes for the council meetings with each member being accompanied by their assistants, bodyguards and secretaries, and you probably need a ballroom or a hangar to housed all of them. And what a waste of petrol it is going to be with all of them driving to the meetings. What are the cabinet ministers and ministries do? You need to form such a big council to do their work for them.

Do we need a council and committees to be debating and meeting over what is best for the Rakyat? or is it a bit too late? or by the time the council set up and talk talk talk over kuih and coffee and by the time they come to agreement it will probably be time for next election. Just wake up, open your ears and listen to the people the answers are blowing in the wind.

Now they are distributing cash this 14th June, saturday in an attempt to appease the rakyat, now i am really not in support of this cash rebate as it does not fairly and equittably alleviate the problem of the lower income group and this system is flawed in the sense that the rich and able will probably be the one mostly benefitting from this as they propably be owners of a few cars or more.

Come on, the Rakyat basically wants to know how and where is the Petronas money, it should be transparent, be honest with the Rakyat and they will lend you their support and understanding. The general sentiment is that the Rakyat feels that their money has not been properly managed and when there are no transparencies there is going to be riling speculation.

(In relation to the earlier post Free Market Regime)
Posted by Unknown at 6:15 AM

In view of the rising price of crude oil, the increase in the petrol is inevitable. The Government should increased the petrol price gradually that inflict as little pain as possible to the rakyat.

Abdullah did not raise the price last year in anticipation of the election on 8th March.

That decision to delay the price increase in petrol did not help him in the election but now come back to haunt the people.

as always, the BN Govt is fond of spending good money to chase bad ones!
In the first place, how the hell are they going to expect to find any solution if half the bloody council tasked to do so consist of the same blooming idiots who suggested it???
Blimey! Better the Singaporeans claim the peninsular north of their island too......

The cabinet labored for 4 hours to come to this momentous decision: 2 hours to get Badawi attention while he dozed. 2 hours for the cabinet members to understand what all this hike is about.....and these idjeets are no technocrats. Their fart has more substance than their words.Fact is they dont have to understand, they just have to say yes! Four hours is to hoodwink that they put much thought into this decision.Bleahhhh.

i always enjoy the statement being expounded by you guys which brings on a smile and a laugh.

thank you for visiting guys.

Fucks. The subsidy stays when oil go up Petroncs make more money so subsidy can be given to the people

sry no four letter words allowed haha but since yours is 5 letter word we will just let it atay.